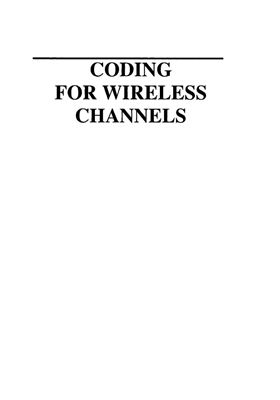 There are, so it is alleged, many ways to skin a cat. There are also many ways to teach coding theory. My feeling is that, contrary to other disciplines, coding theory was never a fully unified theory. To describe it, one can paraphrase what has been written about the Enlightenment: "It was less a determined swift river than a lacework of deltaic streams working their way along twisted channels" (E.
0. Wilson, Consilience, 1999).
The seed of this book was sown in 2000, when I was invited to teach a course on coded modulation at Princeton University. A substantial portion of students enrolled in the course had little or no background in algebraic coding theory, nor did the time available for the course allow me to cover the basics of the discipline. My choice was to start directly with coding in the signal space, with only a marginal treatment of the indispensable aspects of "classical" algebraic coding theory. The selection of topics covered in this book, intended to serve as a textbook for a first level graduate course, reflects that original choice. Subsequently, I had the occasion to refine the material now collected in this book while teaching Master courses at Politecnico di Torino and at the Institute for Communications Engineering of the Technical University of Munich.
While describing what can be found in this book, let me explain what cannot be found. I wanted to avoid generating an omnium-gatherum, and to keep the book length at a reasonable size, resisting encyclopedic temptations. The leitmotiv here is soft-decodable codes described through graphical structures (trellises and factor graphs). I focus on the basic principles underlying code design, rather than providing a handbook of code design. While an earlier exposure to coding principles would be useful, the material here only assumes that the reader has a firm grasp of the concepts usually presented in senior-lever courses on digital communications, on information theory, and on random processes.
Each chapter contains a topic that can be expatiated upon at book length. To include all facts deserving attention in this tumultuous discipline, and then to clarify their finer aspects, would require a full-dress textbook. Thus, many parts should be viewed akin to movie trailers, which show the most immediate and memorable scenes as a stimulus to see the whole movie.
As the mathematician Mark Kac puts it, a proof is that which convinces a reasonable reader; a rigorous proof is that which convinces an unreasonable reader. I assume here that my readers are reasonable, and hence try to avoid excessive rigor at the price of looking sketchy at times, with many treatments that should be taken modulo mathematical refinements.
The reader will observe the relatively large number of epexegetic figures, justified by the fact that engineers are visual animals. In addition, the curious reader may want to know the origin of the short sentences appearing at the beginning of each chapter. These come from one of the few literary works that was cited by C. E. Shannon in his technical writings. With subtle irony, in his citation he misspelled the work's title, thus proving the power of redundancy in error correction. Some sections are marked *. This means that the section's contents are crucial to the developments of this book, and the reader is urged to become comfortable with them before continuing.

Agnieszka Lisowska. Geometrical Wavelets and their Generalization in digital image coding and processing

Dissertation, Poland, 2005. n this dissertation it has tried to answer two questions: How images can be approximated better, which will lead to improving its coding and processing properties. How the most important information may by extracted from an image in an automatic way. Contents: ntroduction (motivation; problem…). Classical Theory of Wavelets (… Haar wavelet; Mallat algorithm; Family of Wavelets…). Geometrical Wavelets. Generalization of...

Издательство John Wiley, 2002, -320 pp. The motivation for this book is twofold. On the one hand, we provide a didactic tool to students of communications systems. On the other hand, we present a discussion of fundamental algorithms and structures for telecommunication technologies. The contents reflect our experience in teaching courses on Algorithms for Telecommunications at the University of Padova, Italy, as well as our professional experien...

Статья
Proceedings of the IEEE, 2000, -63 pp. During the last decade, CD-quality digital audio has essentially replaced analog audio. Emerging digital audio applications for network, wireless, and multimedia computing systems face a series of constraints such as reduced channel bandwidth, limited storage capacity, and low cost. These new applications have created a demand for high-quality digital audio delivery at low bit rates. In response to this nee...

Из серии Foundations and Trends in Signal Processing издательства NOWPress, 2008, -94 pp. Про кодирование путем разделения данных (акцент на вейвлеты). The purpose of this two-part monograph is to present a tutorial on set partition coding, with emphasis and examples on image wavelet transform coding systems, and describe their use in modern image coding systems. Set partition coding is a procedure that recursively splits groups of integer data...

Издательство InTech, 2011, -266 pp. Information has become one of the most valuable assets in the modern era. Recent technology has introduced the paradigm of digital information and its associated benefits and drawbacks. Within the last 5-10 years, the demand for multimedia applications has increased enormously. Like many other recent developments, the materialization of image and video encoding is due to the contribution from major areas like...

Over the past few years, wavelets and their discrete-time cousins, filter banks, or subband coding, have been used in a variety of signal processing applications. From work in harmonic analysis and mathematical physics, and applications such as speech, image compression and computer vision, different disciplines have built up methods and tools now cast in the common framework of wavelets. Offering a unified view of this exciting field, Wavelets...

Издательство Springer, 2005, -302 pp. The unprecedented growth in the range of multimedia services offered these days by modern telecommunication systems has been made possible only because of the advancements in signal processing technologies and algorithms. In the area of telecommunications, application of signal processing allows for new generations of systems to achieve performance close to theoretical limits, while in the area of multimedia...

Издательство Hindawi, 2006, -233 pp. Audio is one of the fundamental elements in multimedia signals. Audio signal processing has attracted attention from researchers and engineers for several decades. By exploiting unique features of audio signals and common features of all multimedia signals, researchers and engineers have been able to develop more efficient technologies to compress audio data. Although books on digital audio have been availabl...