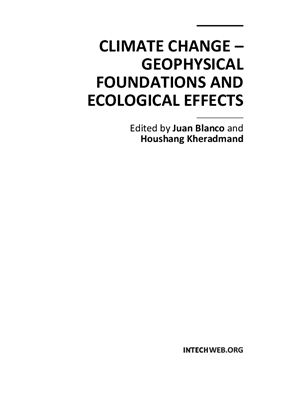 Published by InTech. Janeza Trdine 9, 51000 Rijeka, Croatia. 2011. ISBN 978-953-307-419-1, Hard cover, 520 p.
Первоисточник: http://www.intechopen.com.
This book offers an interdisciplinary view of the biophysical issues related to climate change. Climate change is a phenomenon by which the long-term averages of weather events (i.e. temperature, precipitation, wind speed, etc.) that define the climate of a region are not constant but change over time. There have been a series of past periods of climatic change, registered in historical or paleoecological records. In the first section of this book, a series of state-of-the-art research projects explore the biophysical causes for climate change and the techniques currently being used and developed for its detection in several regions of the world. The second section of the book explores the effects that have been reported already on the flora and fauna in different ecosystems around the globe. Among them, the ecosystems and landscapes in arctic and alpine regions are expected to be among the most affected by the change in climate, as they will suffer the more intense changes. The final section of this book explores in detail those issues.
Contents:
Chemistry-climate connections – interaction of physical, dynamical, and chemical processes in earth atmosphere
Time correlation laws inferred from climatic records: long-range persistence and alteative paradigms
The Paleocene-Eocene thermal maximum: feedbacks between climate change and biogeochemical cycles
Temporal variability of rain-induced floods in southe Quebec
Detecting of a global and Caribbean climate change
Climate changes of the recent past in the south american continent: inferences based on analysis of borehole temperature profiles
Climate change impacts on atmospheric circulation and daily precipitation in the argentine pampas region
Holocene vegetation responses to East Asian monsoonal changes in South Korea
Climate signals from 10be records of marine sediments surrounded with nearby a continent
Drought analysis based on SPI and SAD curve for the Korean peninsula considering climate change
Review of long term macro-fauna movement by multi-decadal warming trends in the northeaste pacific
Global heating threatens the `I`Iwi (Vestiaria Coccinea), currently a common bird of upper elevation forests in Hawaii
Possible effects of future climate changes on the maximum number of generations of anopheles in monsoon Asia
Climate change and shifts in the distribution of moth species in Finland, with a focus on the province of Kainuu
Effects and consequences of global climate change in the Carpathian basin
Climate change impact on quiver trees in arid Namibia and South Africa
Changes in the composition of a theoretical freshwater ecosystem under disturbances
The use and misuse of climatic gradients for evaluating climate impact on Dryland ecosystems - an example for the solution of conceptual problems
Climate-driven change of the stand age structure in the polar Ural mountains
Mountains under climate and global change conditions – research results in the alps
Are debris floods and debris avalanches responding univocally to recent climatic change – a case study in the French Alps
Glaciers shrinking in Nepal Himalaya
Subglacial and proglacial ecosystem responses to climate change
Why do we expect glacier melting to increase under global warming?
Estimation of the sea level rise by 2100 resulting from changes in the surface mass balance of the Greenland ice sheet
Похожие разделы