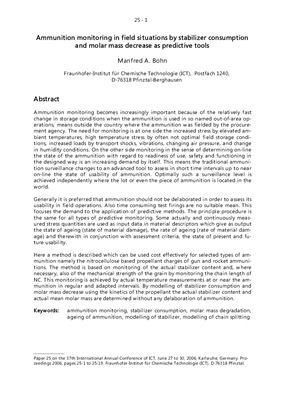 (Бон Манфред А. Мониторинг боеприпасов в полевых условиях с прогнозированием уменьшения процентного содержания стабилизатора и снижения молярной массы). Conference Paper, Electronic Publication.
Karlsruhe, Germany: Energetic materials - insensitivity, ageing, monitoring. 2006. – 19 р. 37th inteational annual conference of Fraunhofer-Institut für Chemische Technologie. Ammunition monitoring becomes increasingly important because of the relatively fast change in storage conditions when the ammunition is used in so named out-of-area operations, means outside the country where the ammunition was fielded by the procurement agency. The need for monitoring is at one side the increased stress by elevated ambient temperatures, high temperature stress by often not optimal field storage conditions, increased loads by transport shocks, vibrations, changing air pressure, and change in humidity conditions. On the other side monitoring in the sense of determining on-line the state of the ammunition with regard to readiness of use, safety and functioning in the designed way is an increasing demand by itself. This means the traditional ammunition surveillance changes to an advanced tool to assess in short time intervals up to near on-line the state of usability of ammunition. Optimally such a surveillance level is achieved independently where the lot or even the piece of ammunition is located in the world.
Похожие разделы