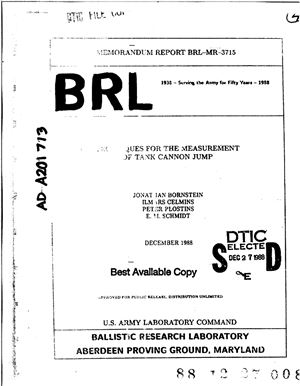 Memorandum report BRL-MR-
3715. Ballistic research laboratory. Aberdeen proving ground, Maryland, 1988. -32 p. To attain the goal of producing tank main gun systems possessing enchanced accuracy, an experimental methodology examining the disturbances acting upon a projectile during the launch process and initial stages of free flight has been developed. The disturbances are characterized by the angular deviation of the projectile trajectory from an anticipated line of flight extending between the gun muzzle and the aim point prior to firing the cannon. Gun motion during the projectile in-bore time, including both rotation of the tube about the trunnions and vibrations of the cannon, is determined using a combination of strain gauges and proximity probes. This information provides the orientation of the muzzle relative to the line of fire and gun velocity perpendicular to the projectile line of flight at the instant the bullet leaves the cannon. A technique employing multiple orthogonal x-rays is used to measure both the linear e.g. and angular motion of the projectile during the transitional ballistic flight phase. Radiographs taken in the immediate vicinity of the muzzle provide the initial flight dynamics, indicating the relative motion of the projectile with respect to the muzzle caused by in-bore balloting, gun/projectile decoupling, initial sabot discard and muzzle blast disturbances. Comparison of these measurements with those obtained from radiographs obtained after sabot separation yield a quantitative measure of the disturbances due to asymmetric sabot discard. The measurements also provide the initial conditions for the free flight trajectory of the projectile. Contents:
Introduction.
Methodology.
Gun Dynamics.
Proximity Probes.
Strain Measurements.
Transitional Ballistics.
Jump Analysis.
Concluding Remarks.
References.