Chapman M.G. The Geology of Mars 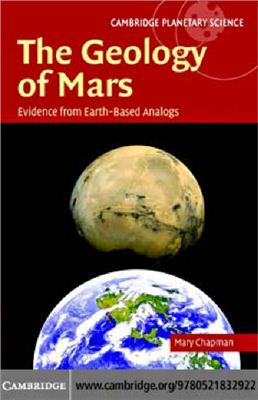 Research into the geological processes operating on Mars relies on interpretation of images and other data retued by unmanned orbiters, probes and landers. Such interpretations are based on our knowledge of processes occurring on Earth. Terrestrial analog studies therefore play an important role in understanding the geological features observed on Mars. This is the first book to present direct comparisons between locales on Earth and Mars, and contains contributions from leading planetary geologists to demonstrate the parallels and differences between these two neighboring planets. Mars is characterized by a wide range of geological phenomena that also occur on Earth, including tectonic, volcanic, impact cratering, eolian, fluvial, glacial and possibly lacustrine and marine processes. The book provides terrestrial analogs for newly acquired data sets from Mars Global Surveyor, Mars Odyssey, Mars Exploration Rovers and Mars Express, and will therefore be a key reference for students and researchers of planetary science.
Cambridge University Press, 484 p.
Смотрите также

Bennison G.M. An Introduction to Geological Structures and Maps

5th ed. Guide book. London, 1990. Edward Arnold. - pp. 76. The book is designed primarily for university and college students taking geology as an honours course or as a subsidiary subject. The book shows the basics of geological mapping and map reading.

Словарь
2nd ed, 2001. The New Penguin Dictionary of Geology is the most extensive and authoritative guide to earth sciences available. Covering over 7,700 key terms, it explains not only the core vocabulary of 'the study of the solid earth' but also relevant terms from the related disciplines of astronomy, biology, environmental geoscience, chemistry and physics. The result is a wide-ranging and up-to-date dictionary that will prove essential for studen...

Монография на английском языке о строении поверхности Марса и процессах которые ее сформировали и изменяют сейчас. Издательство: Cambridge University Press, 2006 y. , p. 307. This book is a systematic summary of what we have learnt about the geological evolution of Mars as a result of the Mars Global Surveyor, Mars Odyssey, Mars Express, and the two Mars Rover missions.The surface of Mars has many geological features that have recognizable counte...

Oldroyd D.R. (Ed.). The Earth Inside and Out: Some Major Contributions to Geology in the Twentieth Century

Geological Society Special Publication. No. 192. London, 2002. -376 pp. The essays in this volume have developed from the proceedings of Section 27 of the International Geological Congress, held at Rio de Janeiro in August 2000. At that meeting - with a view to the arrival of the end of the second millennium - a symposium was held on 'Major Contributions to Geology in the Twentieth Century'