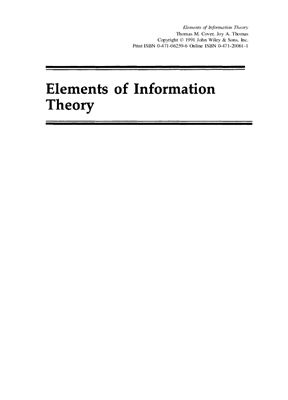 Wiley series in telecommunications. John Wiley & Sons, Inc., 1991. – 563 pages.
This is intended to be a simple and accessible book on information theory. As Einstein said, ’’Everything should be made as simple as possible, but no simpler.’’ This point of view drives our development throughout the book. We were drawn to the field of information theory from backgrounds in communication theory, probability theory and statistics, because of the apparent impossibility of capturing the intangible concept of information. Throughout the book we use the method of weakly typical sequences, which has its origins in Shannon’s original 1948 work but was formally developed in the early 1970s. The key idea here is the so-called asymptotic equipartition property, which can be roughly paraphrased as ''Almost everything is almost equally probable.''
This book has arisen from over ten years of lectures in a two-quarter sequence of a senior and first-year graduate level course in information theory, and is intended as an introduction to information theory for students of communication theory, computer science and statistics.
Смотрите также