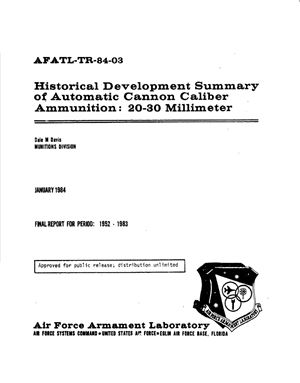 Final report. Eglin Air Force Base, Florida, 1984. – 215 р. This report summarizes much of the research development, test and evaluation of aircraft cannon ammunition during the past thirty years. During that time the author has accumulated samples of much of this work, which have been continuously used as training aids and briefing references for both govement and industry personnel. These samples or models illustrate both the good and the bads: things that worked and things that did not; things that should have been done and things that should not have been done.
The purpose of this report is to set forth the historical story of these models, so that they will be available, at least in photographic form, to a much wider audience. By doing so, it is hoped that future ammunition developers will have a reference work that might serve several purposes, the two most important being (1) to prevent reinvention of what has already been done and (2) to provide inspiration to continue and improve on something which may have potential, but for one reason or another was not brought to use. Contents: Introduction.
20 mm ammunition.
25 mm ammunition.
30 mm ADEN/DEFA.
GAU-8 and similar rounds.
Aluminum cases.
High density penetrators.
Improved 20 mm ammunition.
Plastic cartridge cases.
Dummy ammunition.
Caseless ammunition.
Telescoped ammunition and telescoped caseless ammunition.
GAU-7 projectiles.
Thin-wall steel cases.
Flechettes.
Rocket-assisted projectiles.
Rotating bands (plastic in particular).
Target practice projectiles.
Miscellaneous: including things that never were, should not have been, or were ahead of their time.
Summary and conclusions.
Похожие разделы