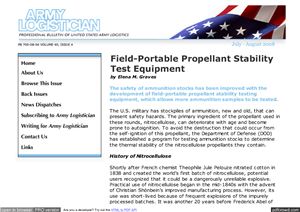 (Грайвс Елена. Полевое портативное испытательное оборудование по проверке порохов на стабильность). Army Logistician. 2008, Vol. XXXX. Issue IV. p.20. Professional bulletin of United States army logistics.
The safety of ammunition stocks has been improved with the development of field-portable propellant stability testing equipment, which allows more ammunition samples to be tested.
The U.S. military has stockpiles of ammunition, new and old, that can present safety hazards. The primary ingredient of the propellant used in these rounds, nitrocellulose, can deteriorate with age and become prone to autoignition. To avoid the destruction that could occur from the self-ignition of this propellant, the Department of Defense (DOD) has established a program for testing ammunition stocks to determine the thermal stability of the nitrocellulose propellants they contain.
Похожие разделы