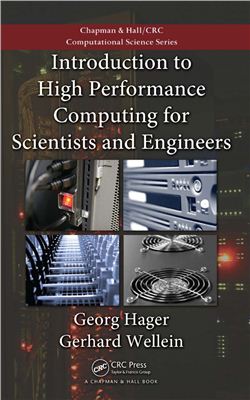 Written by high performance computing (HPC) experts, Introduction to High Performance Computing for Scientists and Engineers provides a solid introduction to current mainstream computer architecture, dominant parallel programming models, and useful optimization strategies for scientific HPC. From working in a scientific computing center, the authors gained a unique perspective on the requirements and attitudes of users as well as manufacturers of parallel computers.

The text first introduces the architecture of mode cache-based microprocessors and discusses their inherent performance limitations, before describing general optimization strategies for serial code on cache-based architectures. It next covers shared- and distributed-memory parallel computer architectures and the most relevant network topologies. After discussing parallel computing on a theoretical level, the authors show how to avoid or ameliorate typical performance problems connected with OpenMP. They then present cache-coherent nonuniform memory access (ccNUMA) optimization techniques, examine distributed-memory parallel programming with message passing interface (MPI), and explain how to write efficient MPI code. The final chapter focuses on hybrid programming with MPI and OpenMP.


Users of high performance computers often have no idea what factors limit time to solution and whether it makes sense to think about optimization at all. This book facilitates an intuitive understanding of performance limitations without relying on heavy computer science knowledge. It also prepares readers for studying more advanced literature.
Похожие разделы
Смотрите также

2nd Edition. Wiley series on parallel and distributed computing, John Wiley & Sons, Inc., 2004. – 416 pages. This book aims to provide a coherent view of the theory of distributed computing, highlighting common themes and basic techniques. It introduces the reader to the fundamental issues underlying the design of distributed systems – communication, coordination, synchronization, and uncertainty – and to the fundamental algorithmic ideas and...

Издательство Morgan Kaufmann, 2001, -163 pp. For a number of years, I have believed that advances in software, rather than hardware, held the key to making parallel computing more commonplace. In particular, the lack of a broadly supported standard for programming shared-memory multiprocessors has been a chasm both for users and for software vendors interested in porting their software to these multiprocessors. OpenMP represents the first vendor...

Издательство InTech, 2011, -284 pp. During the last decades we have been experiencing the historic evolution of Information and Communication Technology’s integration into our society to the point that many times people use it transparently. As we become able to do more and more with our advanced technologies, and as we hide them and their complexities completely from their users, we will have accomplished the envisioned magic desideratum that a...

Fuller S.H., Millett L.I. The Future of Computing Performance: Game Over or Next Level?

National Academies Press, 2011. - 186 p. - ISBN: 0309159512 The end of dramatic exponential growth in single-processor performance marks the end of the dominance of the single microprocessor in computing. The era of sequential computing must give way to a new era in which parallelism is at the forefront. Although important scientific and engineering challenges lie ahead, this is an opportune time for innovation in programming systems and computi...

Wiley series on parallel and distributed computing. Wiley & Sons, Inc., 2011, - 365 pages. There is a software gap between hardware potential and the performance that can be attained using today’s software parallel program development tools. The tools need manual intervention by the programmer to parallelize the code. This book is intended to give the programmer the techniques necessary to explore parallelism in algorithms, serial as well as...

Издательство Addison Wesley, 2003, - 856 pp. Increasingly, parallel processing is being seen as the only cost-effective method for the fast solution of computationally large and data-intensive problems. The emergence of inexpensive parallel computers such as commodity desktop multiprocessors and clusters of workstations or PCs has made such parallel methods generally applicable, as have software standards for portable parallel programming. This...

Издательство Cambridge University Press, 2008, -754 pp. The field of distributed computing covers all aspects of computing and infor- mation access across multiple processing elements connected by any form of communication network, whether local or wide-area in the coverage. Since the advent of the Internet in the 1970s, there has been a steady growth of new applications requiring distributed processing. This has been enabled by advances in netw...

Энциклопедия
Springer – 2012, 2195 pages ISBN10: 0387098445 Containing over 300 entries in an A-Z format, the Encyclopedia of Parallel Computing provides easy, intuitive access to relevant information for professionals and researchers seeking access to any aspect within the broad field of parallel computing. Topics for this comprehensive reference were selected, written, and peer-reviewed by an international pool of distinguished researchers in the field. The...

Ros A. Parallel and Distributed Computing

Издательство InTech, 2010, -298 pp. Parallel and distributed computing has offered the opportunity of solving a wide range of computationally intensive problems by increasing the computing power of sequential computers. Although important improvements have been achieved in this field in the last 30 years, there are still many unresolved issues. These issues arise from several broad areas, such as the design of parallel systems and scalable inte...

Издательство Springer, 2009, -530 pp. The use of parallel programming and architectures is essential for simulating and solving problems in modern computational practice. There has been rapid progress in microprocessor architecture, interconnection technology and software development, which are influencing directly the rapid growth of parallel and distributed computing. However, in order to make these benefits usable in practice, this developmen...