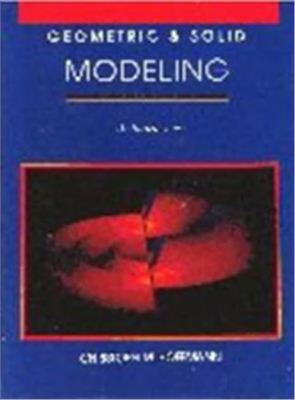 Today, our imagination is limited by the computer systems we have built. The demand for sophisticated tools has grown faster than the corresponding developments of the supporting science base.
Written by one of the leading experts in the field of solid-modeling systems, Geometric and Solid Modeling: An Introduction provides the start of a scientific basis to support the coming revolution in computer-aided design. It deals with the concepts and tools needed to design and implement solidmodeling systems, and makes this information accessible to the novice, as well as to the experienced designer.
Man has always distinguished himself from other animals with the aid of language, art, and tools. Language and art remain man's way of representing ideas, either for communicating them to other people or for giving them permanence. Tools extend his strength and mobility.
In early society, tools were simple and the ideas behind their function and manufacture were easily communicated, either verbally or by example. As the complexity of tools increased, written drawings and other documents became an essential component of design. In today's technologically advanced society, in which tools have reached the complexity of a spacecraft, the development of a design requires a team of engineers. Writing, and even drawing and sculpting, are found to be inadequate; they are static and of too limited a dimension for expressing complex designs.
Computers are revolutionizing our ability to represent, develop, and communicate knowledge. By abstracting knowledge into procedures, computers provide dynamic and powerful representations, and enhance our ability to manipulate and expand our thoughts.
In the past, a new product was created by investigating a design in the abstract, using paper, pencil and whatever other tools were available. The design was communicated through the medium of engineering drawings to a manufacturer who built the device. In the future, computers will be used to explore much larger design spaces, and designs will be communicated directly to machines manufacturing the product. The result will be a wider selection of products of higher quality and lower cost.
Imagine using a computer model of an object instead of a physical prototype to validate a complex design. The computer prototype would allow changes with a few key strokes, as well as allow engineering analyses to be automatically carried out. For example, a multifingered gripper could be modeled and electronically simulated in various manipulation tasks, exploring the advantage of the number and placement of fingers.
In the early stages of a new technology, the techniques and methods of the older technology are simply simulated. Gradually the full power of the new technology is achieved as new methods utilizing the natural advantages of the technology are developed. Thus it was not surprising that the initial usage of Computer Aided Design systems was in automating drafting. Today, computer-aided-design (CAD) systems provide new representations of objects as three-dimensional entities rather than as two-dimensional projections. Ultimately we will realize that an object is defined by something more intrinsic than its shape.
Solid modeling and computer-aided design are quickly becoming vital to economic productiveness. The sophistication of new products has necessitated a coinciding sophistication in such engineering tools as computer-aided design systems and analysis programs. The Boeing 767 could not have been designed without such automated tools. Similarly, complex parts for spacecraft, robotic workcells and VLSI technology are accelerating this need. Geometric and Solid Modeling: An Introduction is a welcome introduction to an increasingly sophisticated and fast-growing field.