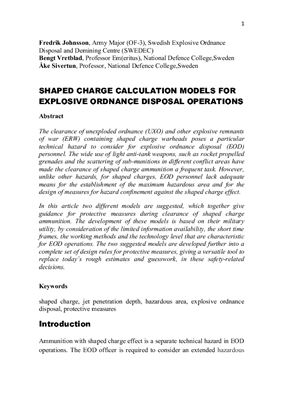 Research paper. Joual of Military Studies, Vol 3, No 1 (2012). The clearance of unexploded ordnance (UXO) and other explosive remnants of war (ERW) containing shaped charge warheads poses a particular technical hazard to consider for explosive ordnance disposal (EOD) personnel. The wide use of light anti-tank weapons, such as rocket propelled grenades and the scattering of sub-munitions in different conflict areas have made the clearance of shaped charge ammunition a frequent task. However, unlike other hazards, for shaped charges, EOD personnel lack adequate means for the establishment of the maximum hazardous area and for the design of measures for hazard confinement against the shaped charge effect.
In this article two different models are suggested, which together give guidance for protective measures during clearance of shaped charge ammunition. The development of these models is based on their military utility, by consideration of the limited information availability, the short time frames, the working methods and the technology level that are characteristic for EOD operations. The two suggested models are developed further into a complete set of design rules for protective measures, giving a versatile tool to replace today´s rough estimates and guesswork, in these safety-related decisions. Contents:
Introduction.
EOD Operations.
Protective Measures.
The clearance procedure.
Operational requirements.
Shaped charges.
Basic principles.
Penetration depth.
Model for calculation of penetration depth.
Model for required thickness of measures for hazard confinement.
A tool for design of measures for hazard confinement.
Maximum throw distance for estimation of risk area from undisturbed jet from shaped charges.
A tool for estimation of maximum hazardous area.
Risk considerations.
Conclusion.
Похожие разделы