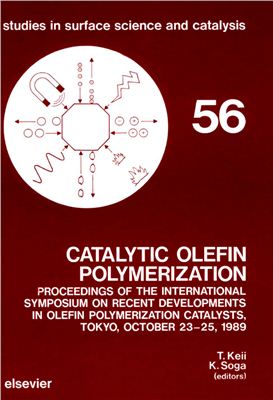 Recent development of a new generation of Ziegler-Natta Catalysts using either magnesium dichloride as carrier or methylaluminoxane as cocatalyst has markedly stimulated the research activity in the field of olefin polymerization. These discoveries have not only yielded economical processes for polyolefin production but also opened the way to a new generation of novel polymers. Moreover, the nature of active species is being clarified well by the effort to simplify catalyst systems. The present volume includes 38 papers from the 31 lectures and 18 posters presented at the symposium on `Recent Developments in Olefin Polymerization Catalysts', which covered the following topics: Overview of super-active homogeneous and heterogeneous catalysts, kinetic profile of olefin polymerization including copolymerization, characterization of catalysts and polymers, methods for the determination of active center concentration, role of Lewis bases on the catalysts isospecificity, polymerization mechanisms, and synthetic pathways for functionalized polyolefins.
Похожие разделы
Смотрите также

TSRI Press. 1999. - 486 p. The notes have been used as the introductory section of a course on Modern Organic Synthesis that composes 6 weeks or a little more than one-half of a quarter course at The Scripps Research Institute, Department of Chemistry. Consequently, an exhaustive treatment of the individual topics is beyond the scope of this portion of the course. The remaining 4 weeks of the quarter delve into more detail on various topics and i...

Academic Press. 1981. 513 p. Karl Paul Gerhardt Link (1901-1978) The Selective Removal of Protecting Groups in Carbohydrate Chemistry The Reactivity of Cyclic Acetals of Aldoses and Aldosides Synthesis and Polymerization of Anhydro Sugars The Chemistry of Maltose Chemistry and Biochemistry of D- and L-Fucose The Utilization of Disaccharides and Some Other Sugars by Yeasts Affinity Chromatography of Macromolecular Substances on Adsorbents Bearing...

ACS Symposium Series 841, ACS – 2003. – 210 p. Most of the chapters in this book were presented in the special symposium Chemistry for the 21st Century at the 218th ACS National Meeting in San Francisco, California on March 26-30, 2000. Other chapters, not presented at the symposium, are contributions from leading scientists in the field of carbohydrate chemistry. Most importantly, these topics will help steer the future of new developments in th...