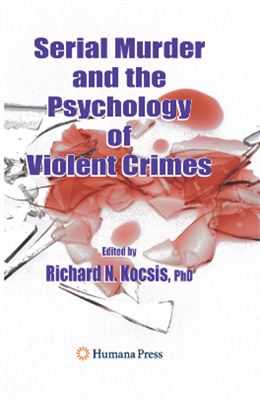 Humana Press, 2008 e-ISBN: 978-1-59745-578-7
Library of Congress Control Number: 2007933143
Despite technological and societal advances, crimes of an inexplicably violent nature still permeate contemporary civilizations throughout the world. The very existence of such aberrations, despite the passage of time over the centuries and the supposed evolution of our societies, suggests that some of the most basic instincts inherent to humanity may fundamentally relate to its proclivity for violence. Far from being manifestations of the mode era, serial violent crimes bear an uncanny resemblance to a number of ancient mythological creatures. These similarities raise suggestions that such creatures may have been attempts by ancient cultures to account for the abhorrent crimes. A series of seemingly unrelated brutal murders featuring the excessive mutilation of victims, with indications of body parts having been consumed and/or blood having been drunk, provided inspiration for folklore creatures such as werewolves or vampires. Similarly, the demonic spirits known as incubi that would rape women may be the ancient world seeking to account for serial rapists. Moving beyond these mythological examples, identifiable vignettes of serial violent crimes can be found in history, such as the Roman emperor Nero, who is well chronicled for his madness and delight in starting fires. Serial violent crimes in contemporary society no longer typically invoke any relation with the supeatural but are, instead, now more notionally explained by labels such as serial murder, serial rape, or serial arson. However, what is more difficult to reconcile than the simple labeling of these behaviors is their continued manifestation. Whereas perhaps some argument may be advanced that serial violent crimes were an artifact of barbaric and/or less evolved societies, the basis for this rationale seems to be undermined by the observation of these crimes in contemporary and arguably progressive societies of the mode era.
Похожие разделы
Смотрите также

2006 Humana Press Inc. Totowa, New Jersey 07512, eISBN: 1-59745-099-5 Forensic Anthropology and Medicine. Complementary Sciences From Recovery to Cause of Death. Two Sciences, One Objective Aging Living Young Individuals Pathophysiology of Death and Forensic Investigation: From Recovery to the Cause of Death Biological Identity Particular Contexts: Crimes Against Humanity and Mass Disasters

Humana Press 2008 ISSN: 1 556-5661 eISBN: 978-1-59745-110-9 The Forensic Pathology Reviews series has gained considerable attention worldwide over the last years and here is presented the fifth volume of this series. As with previous volumes, it is an attempt to focus on both practical and scientific aspects of the different areas of expertise within the broad field of forensics. Advances in forensic sciences and a profound knowledge of the resul...