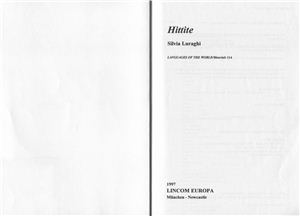 Hittite belongs to the Anatolian branch of the Indo-European language family, which has become extinct in the first half of the first millenium b.C. Among the Anatolian languages Hittite is the best attested; for our knowledge of it we can relay on several thousands of clay tables, dating back to about 1750 b.C. - 1150 b.C. One of the biggest matters of interest conceing Hittite lies in its differences from the ancient Indo-European languages. The author does not aim at an evaluation of the relative antiquity of the Hittite features in comparison to those of the other Indo-European languages, rather, the author is going to highlight the pecularities which can be connected with major typological issues. Topics related in this sketch include:

(1) the socio-linguistic situation of Anatolia in the second millenium b.C.; (2) phoneme inventory; graphic problems connected with the use of cuneiform and the evolution of scribal habits; (3) relative chronology of Hittite texts and periodization of the Hittite language; (4) morphology: word formation, parts of speech and their inflectional categories; gender system; (5) syntax: noun and verb phrase; types of adnominal modifiers; auxiliaries; use of cases; verbal voice; TAM system; (6) word order within the simple sentence; sentence initial and sentence final position; clitics; position of the finite verb; (7) parataxis and hypotaxis; connectives and asyndesis; types of subordinate clauses; infinitives; (8) anaphoric relations within the text.

The text for analysis is from Old Hittite, particularly interesting for what conces word order and the use of connectives.
Похожие разделы
Смотрите также

2008 г. - 113 p. The outline of grammar presented here is inspired from the Hethitisches Elementarbuch by Johannes Friedrich. However, it is not an exact translation of this book. I have nevertheless used his examples, his tables of the different paradigms and his numbering of the classes of verbs (referenced in the lexicon). I have deviated from the usual rules of transcription of Hittite by replacing the sign ? by the letter 's', according to...

Словарь
Puhvel, Jaan (1984), Hittite Etymological Dictionary, vol. 1 & 2, Berlin-New York: Mouton de Gruyter, is a reference etymological dictionary of the Hittite language with a lot of textual data, Vol. 1 (words beginning with A), first part of a single book containing vol. 1 (A) and vol. 2 (E-I), is a 247 page long volume.