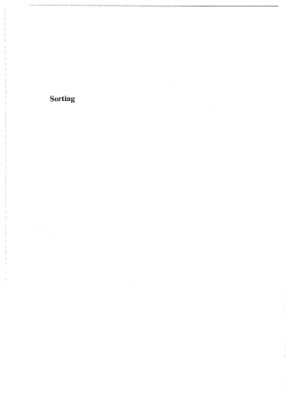 Putting data in order is an intellectual activity that is perhaps one of the oldest prob- problems of applied mathematics. The wall of the corridor of Abydos Temple in Egypt is padded with a chronologically ordered list (Gallery of the List of Kings). Dating back to around 1250 B.C., this display allegedly lists the Pharaohs who had preceded Siti I (mode research proves that the list makes some false historical claims; a few rulers of Egypt before Siti I are omitted from that list!) The Inakibit-Anu Babylonian tablets, dating back to 200 B.C., contain a sorted list of what seems to be several hundred records, of which only a little over 100 records are preserved. Alphabetical ordering of words dates at least as far back as Weste dictionaries. Over the millennia people have been yeaing to find fast efficient sorting algorithms. With the appearance of computers in the twentieth century, sorting occupied a central position among computing problems for its numerous business and administrative potentials.
This is a book about sorting methods with a general focus on their analysis. We concentrate on well-known algorithms that are widely used in practice. Of course, to the basic skeleton of any such algorithm small improvements have been proposed. We present these algorithms in their simplest form, even when a modification is known to improve them. This choice is motivated by a desire to make the material lucid. While they may affect lower-order terms, the modifications usually do not change the dominant asymptotic behavior. The analysis techniques are as varied as the sorting algorithms themselves, giving rise to a fascinating variety of methods, ranging from standard treatment such as elementary probability theory, combinatorial counting, and graph-theoretic methods, to instances of more mode techniques such as martingales, Poissonization, Wasserstein's metric space, and the Mellin transform.
We discuss a variety of standard sorting methods that can be readily implemented on a conventional computer. The book takes the following algorithmic view. When a deterministic algorithm runs on a set of data of size n, certain computing resources are committed. Among standard resources are the running time and the amount of memory needed to support the algorithm. A suitable combination of these computing resources may be referred to as the cost. Running the deterministic algorithm on the same data set will always give the same results. However, running the deterministic algorithm on a different data set of size n may result in different cost. Putting a reasonable probability measure on the set of inputs of size n renders the cost a random variable. Interpreting costs as random variables provides some understanding of the behavior of the algorithm over the variety of data sets the algorithm may face. Probabilistic analysis addresses the natural questions one usually asks about random variables. What are the average, variance, higher moments, and exact distributions? In many cases it may be prohibitive to get exact answers. Even when such answers are obtained they may give little insight into the algorithm's behavior. Exact answers often take the form of multifolded sums of products or similar complicated forms. Insight is gained by simplifying such expressions asymptotically, that is, finding a simple representation of the leading terms in the form of elementary functions of n, when n gets large. Asymptotics then provide quick ways of estimating how the mean and other moments grow with n, and how probabilities change. Limiting distributions give ways to approximate probabilities from standard distributions that may be well known and tabulated. A question of interest to the practitioner is how large n should be before one can consider limit distributions as reliable approximations. This is a question of finding rates of convergence. We give a few examples of rates of convergence in the book. It is fascinating to find that some phenomena in sorting algorithms may have essential periodic fluctuations in leading asymptotic terms or in rates of convergence to such terms.

Discover the benefits of applying algorithms to solve scientific, engineering, and practical problems Providing a combination of theory, algorithms, and simulations, Handbook of Applied Algorithms presents an all-encompassing treatment of applying algorithms and discrete mathematics to practical problems in "hot" application areas, such as computational biology, computational chemistry, wireless networks, and computer vision. In eighteen self-c...

Co-authored by four leading scientists from academia and industry, Numerical Recipes Third Edition starts with basic mathematics and computer science and proceeds to complete, working routines. Widely recognized as the most comprehensive, accessible and practical basis for scientific computing, this new edition incorporates more than 400 Numerical Recipes routines, many of them new or upgraded. The executable C++ code, now printed in color for ea...