Mintz M.W. A Student's Grammar of Malay and Indonesian 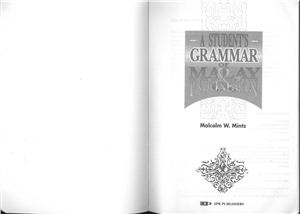 An Indonesian & Malay Grammar for Students was written to help students studying Malay or Indonesian as a foreign language. It is a grammar which describes both conversational and formal language. Both Malay and Indonesian usage are presented.

The Grammar is divided into 12 chapters. The sound system is discussed in Chapter
1. In Chapter 2 are the main sentence pattes, phrases, clauses and coordinating conjunctions. The tense and aspect systems are explained in Chapter
3. Chapter 4 looks in some detail at the various pronouns, discussing formal and informal personal pronouns, as well as demonstrative, locative, interrogative and indefinite pronouns.

The verbal affixes are examined in Chapter
5. The prefixes meng-, ber-, and ter- are introduced and compared as are the suffixes -kan and -i. In Chapter 6 the nominal affixes are presented These include the agent prefixes peng- and pe-and the process and state affixes peng-an and per-an.

Chapter 7 examines some general affixes such as those indicating equivalence, se-, emphasis, -lah, and interrogation, -kah. Various types of comparisons and differences are examined in Chapter
8. Chapter 9 looks at the form and meaning of reduplication, meanings such as individuality, intensity and emphasis, repetitiveness, continuation, generality, and reciprocity.

Chapter 10 discusses the negatives bukan, tidak and jangan, and the tag questions tak, kan and kok. Chapter 11 looks at numbers and time. Chapter 12 is a general chapter in which a number of terms which frequently cause students problems are discussed and compared. Included here are comparisons between minta and tanya, memang and tentu, juga, pun and pula, and various terms of obligation such as sepatutnya, seharusnya, sebaiknya and many others.

New to this edition is a full Indonesian/Malay - English Glossary containing all of the words used in the text. The Index has also been revised to enable swift and easy access to any topic a student may be interested in finding. Also included in the index are references to definitions of grammatical terms used in the text. The format of the text is also new, with each sub-section now preceded by a title indicating the content of the section.
Смотрите также

Atmosumarto S. , Othman Z. Colloquial Malay: The Complete Course for Beginners. - Routledge, 1995. - 298 p. With this complete language course, you are just a few easy lessons away from gaining the confidence and ability to communicate in contemporary Malay. Let yourself be guided through the Malaysian culture, customs, politics, and trade while developing expert pronunciation. As Malay is spoken in some areas of Indonesia, this makes a perfect...

Atmosumarto S. , Othman Z. Colloquial Malay: The Complete Course for Beginners. - Routledge, 1995. - 298 p. With this complete language course, you are just a few easy lessons away from gaining the confidence and ability to communicate in contemporary Malay. Let yourself be guided through the Malaysian culture, customs, politics, and trade while developing expert pronunciation. As Malay is spoken in some areas of Indonesia, this makes a perfect...

Sneddon J.N. Indonesian Reference Grammar. - ALLEN & UNWIN, 2010. - 401 p. ISBN-13 / EAN: 9781742371351 This reference grammar has established a reputation as a highly regarded learning tool for Indonesian language students around the world. Designed for teachers and students with no background in linguistics, it offers a comprehensive description of the structure of the Indonesian language, written in a clear, non-technical manner. All t...

Sneddon J.N. Indonesian: A Comprehensive Grammar. - Routledge , 1996. - 415 p. Indonesian: A Comprehensive Grammar provides a description of the structure of the Indonesian language written in a clear, non-technical manner. It is a complete reference guide to the language as it is spoken and written by native speakers and can readily be used by speakers of Indonesian who have no linguistic background. To aid clarity, all word groups and struct...

Sneddon J.N. The Indonesian Language: Its History and Role in Modern Society

University of Washington Press, 2004. - 248 p. ISBN-13 / EAN: 9780868405988 ISBN-10 / ASIN: 0868405981 Indonesia is the fourth most populous nation in the world, and one of the most linguistically complex. Its ethnic groups speak more than 500 languages and of these Malay, renamed Indonesian, was chosen to be the sole national and official language. Indonesian's development into a modern world language has been described by one socio-linguist a...

Sulaiman O. Malay for Everyone

Sulaiman O. Malay for Everyone. - Pelanduk Publications, 1997. - 308 p. Malay for Everyone is a specially designed teach-yourself guide for those who are conversant in English and have a desire to learn and master the Malay language in the shortest time possible. This book guarantees thorough grounding in all the basic elements of the language, thus enabling learners to acquire a practical knowledge of the Malay language. Written with the lear...