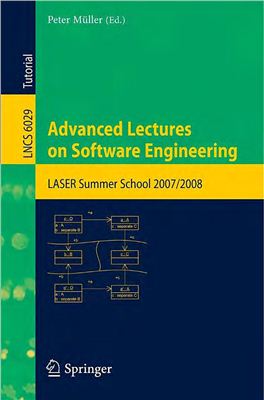 Only five years after its inception, the LASER Summer School on Software Engineering has established itself among the premier training schools for PhD students and professionals from the industry. Each year, the summer school focuses on an important software engineering topic. This book contains selected lecture notes from the LASER Summer Schools 2007 and 2008, both of which focused on correctness—Applied Software Verification in 2007 and Concurrency and Correctness in 2008.
From the 2007 summer school on Applied Software Verification, this volume contains contributions by Tony Hoare on the verification of fine-grain concurrency and transactions, by Benjamin Morandi, Sebastian Bauer, and Bertrand Meyer on the SCOOP model for concurrent object-oriented programming, by Rustan Leino and Peter Muller on the Spec# programming and verification system, and by Natarajan Shankar on verification in the Prototype Verification System PVS. From the 2008 summer school on Concurrency and Correctness, the volume includes lecture notes by Tryggve Fossum on multi-core chip design. I would like to thank the lecturers and their co-authors, who devoted much time to contributing to this volume. I am grateful to Marieke Huisman, Ling Liu, Rosemary Monahan, Matthew Parkinson, Sarvani Vakkalanka, and Hagen Volzer for their valuable feedback on drafts of the papers and to MarliesWeissert for her assistance in preparing the proceedings. Last but not least, I would like to thank Bertrand Meyer and his team for making the LASER Summer School such an enjoyable experience.

Endres A., Rombach D. A Handbook of Software and Systems Engineering

The book is a collection of empirical laws, theories and observations, which were proved to be useful in Software Engineering. It sums up the experience gained during sfotware development in hundreds of projects. Table of Contents: Chapter 1: Introduction Chapter 2: Requirements definition, prototyping, and modeling Chapter 3: System design and specification Chapter 4: System construction and composition Chapter 5: Validation and static verifica...

Издательство Springer, 2005, -571 pp. Third Edition An introductory course in Software Engineering remains one of the hardest subjects to teach. Much of the difficulty stems from the fact that Software Engineering is a very wide field which includes a wide range of topics. Consequently, what should be the focus of an introductory course remains a challenge with many possible viewpoints. This third edition of the book approaches the problem from...

An introductory course on Software Engineering remains one of the hardest subjects to teach largely because of the wide range of topics the area encompasses. I have believed for some time that we often tend to teach too many concepts and topics in an introductory course resulting in shallow knowledge and little insight on application of these concepts. And Software Engineering is finally about application of concepts to efficiently engineer good...

Pressman's Software Engineering: A Practitioner's Approach is celebrating 20 years of excellence in the software engineering field. This comprehensive 5th edition provides excellent explanations of all the important topics in software engineering and enhances them with diagrams, examples, exercises, and references. In the fifth edition, a new design has been added to make the book more user friendly. Several chapters have been added including cha...

Sensible choice and organization of topics, made all the more authoritative by the author's credentials as a senior academic in the area Prof. David S. Rosenblum, University College London I find Somerville inviting and readable and with more appropriate content Julian Padget, University of Bath Sommerville takes case studies from radically different areas of SE. This avoids excessive stereotyping (hence blinkering), but permits some depth and de...

Wiley-Interscience, 2005. - 440 p. - ISBN: 0471713457 The one resource needed to create reliable software This text offers a comprehensive and integrated approach to software quality engineering. By following the author's clear guidance, readers learn how to master the techniques to produce high-quality, reliable software, regardless of the software system's level of complexity. The first part of the publication introduces major topics in softwa...