Pippard A.B. The Physics of Vibration 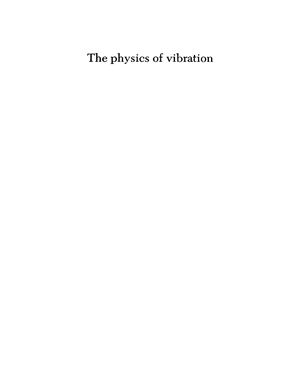 The study of vibration in physical systems is central to almost all fields in physics and engineering. This work, originally published in two volumes, examines the classical aspects in Part I and the quantum oscillator in Part II. The classical linear vibrator is treated first and the underlying unity of all linear oscillations in electrical, mechanical and acoustic systems is emphasized. The treatment of nonlinear vibrations, a field with which engineers and physicists are generally less familiar, is then examined. Part II then concentrates on quantum systems, looking at the vibrations in atoms and molecules and their interaction with electromagnetic radiation. The similarities of classical and quantum methods are stressed and the limits of the classical treatment are examined. Throughout the book, each phenomenon discussed is well illustrated with many examples; and theory and experiment are compared. This is a useful introduction to the more advanced mathematical treatment of vibrations as it bridges the gap between the basic principles and more specialized concepts.
Смотрите также

Cengage Learning, 2008. - 736 pages. Featuring outstanding coverage of linear and non-linear single degree-of-freedom and multi-degree-of-freedom systems, this book teaches the use of vibration principles in a broad spectrum of applications. In this introduction for undergraduate students, authors Balakumar Balachandran and Edward B. Magrab present vibration principles in a general context and illustrate the use of these principles through caref...

Springer, 2010. 538 p. ISBN:9400702884 Proceedings of the IUTAM Symposium on the Vibration Analysis of Structures with Uncertainties held in St. Petersburg, Russia, July 5–9, 2009. The Symposium was aimed at the theoretical and numerical problems involved in modelling the dynamic response of structures which have uncertain properties due to variability in the manufacturing and assembly process, with automotive and aerospace structures forming...

CRC Press, 2010. 336 p. ISBN:1439817987, 978-1-4398-1798-8 (Hardback) From the ox carts and pottery wheels the spacecrafts and disk drives, efficiency and quality has always been dependent on the engineer’s ability to anticipate and control the effects of vibration. And while progress in negating the noise, wear, and inefficiency caused by vibration has been made, more is needed. Modeling and Control of Vibration in Mechanical Systems answers t...

New Age Publications, 2007. - 236 pages. Vibration Analysis is an exciting and challenging field and is a multidisciplinary subject. This book is designed and organized around the concepts of Vibration Analysis of Mechanical Systems as they have been developed for senior undergraduate course or graduate course for engineering students of all disciplines. This book includes the coverage of classical methods of vibration analysis: matrix analysis...

InTech, 2011. 456 p. ISBN:9789533072098 Vibrations are extremely important in all areas of human activities, for all sciences, technologies and industrial applications. Sometimes these Vibrations are useful but other times they are undesirable. In any case, understanding and analysis of vibrations are crucial. This book reports on the state of the art research and development findings on this very broad matter through 22 original and innovative...

Springer, 2010 p. 458 p. ISBN:1441957537 Dynamical Systems: Discontinuous, Stochasticity and Time-Delay provides an overview of the most recent developments in nonlinear dynamics, vibration and control. This book focuses on the most recent advances in all three areas, with particular emphasis on recent analytical, numerical and experimental research and its results. Real dynamical system problems, such as the behavior of suspension systems of r...

Wiley, 2011. 308 p. ISBN:0470747854 Explaining complex ideas in an easy to understand way, Vibration-based Condition Monitoring provides a comprehensive survey of the application of vibration analysis to the condition monitoring of machines. Reflecting the natural progression of these systems by presenting the fundamental material and then moving onto detection, diagnosis and prognosis, Randall presents classic and state-of-the-art research res...

Sinha A. Vibration of Mechanical Systems

Cambridge University Press, 2010. 324 p. ISBN:0521518733 This is a textbook for a first course in mechanical vibrations. There are many books in this area that try to include everything, thus they have become exhaustive compendiums overwhelming for the undergraduate. In this book, all the basic concepts in mechanical vibrations are clearly identified and presented in a concise and simple manner with illustrative and practical examples. Vibratio...