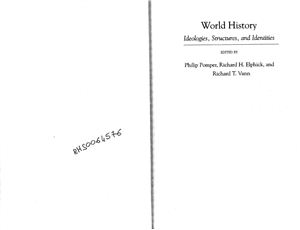 Essays issuing from the World History Conference held at Wesleyan University on March 25-26, 1994. An early reviwer said this of the volume: "We have here a very valuable collection that must help anyone to clarify what world history is. This is by no means a hegemonic book, where we end up being told how to 'do' world history. To the contrary, the collection is particularly useful because it represents so many points of view, and thus will stimulate discussion and no doubt rebuttal from practitioners of very divergent versions of world history." - Michael Naylor pearson, Joual of World History, 11:2 (2000), pp. 350-353.
From the Back Cover
World history is currently one of the most exciting areas of discussion amongst historians. In this book some of the most distinguished scholars and public intellectuals in the field present magisterial overviews and innovative approaches to the key problems of world history. Others offer radical postmode and postcolonial critiques of holism, identity, and Weste "scientific" history in favor of a different kind of universalism. The collection thus presents both the development of the field and current lively debates within it, challenging readers to rethink their notions about the direction, meanings, and uses of world history.
The book is intended to stimulate lively discussion among both teachers and students and to suggest new ways to conceptualize and organize their study of world history. It will be welcomed by all those interested in teaching history courses attuned to the global era in which we live.
About the Author
Philip pomper is William F. Armstrong professor of History at Wesleyan University. He is also Associate Editor of History and Theory. He has written primarily on the Russian revolutionary intelligentsia and on the uses of psychology in history.
Richard H. Elphick is professor of History at Wesleyan Univeristy. He has written on the origins of white dominance in Southe Africa and on the history of Liberalism and Christianity in the region. He is currently interested in missions and Christianity in world history.
Richard T. Vann is professor of History and letters at Wesleyan University. He is Senior Editor of History and Theory and has written on the history of family life in a world perspective.

Wadsworth Publishing, 2011 - 816 p. ISBN10: 0495913006 ISBN13: 9780495913009 Product Description: Short chapters, great stories, and tons of study tools! Adler and Pouwels's WORLD CIVILIZATIONS is a vibrant introduction to world history structured to meet the demands of your study schedule. It's clearly written, packed with charts and illustrations, and loaded with review features so you'll be up to date in class and ready for the test. And, bec...

Grenville J.A.S. A History of the World: From the 20th to the 21st Century

Routledge, 2005 - 1008 p. ISBN10: 0415289556 ISBN13: 9780415289559 (eng) This second edition has been thoroughly updated and includes discussions on 9/11 and the second Gulf War, and takes into account the latest historical research. A comprehensive survey of the key events and personalities of this period throughout the world, it includes discussion on topics such as: * the rivalry between European nations from 1900–1914 * the Depression a...

Wadsworth Publishing, 2008 - 973 p. For courses entitled World Civilizations or World History. Volume II can be used for Modern World History. Courses are generally two semesters or three quarters in length and are Freshman/Sophomore level. Some schools offer a one-semester course - these are usually for people who are becoming teachers and may be taught out of the School of Education. This is a growing course, and it may be replacing Western Ci...

Toynbee Arnold. A Study of History

Thames & Hudson, 1972. - 576 p. In The Study, Toynbee revolutionized the writing of history. By encompassing virtually all civilizations - the Egyptian, the Sumeric, the Mayan, the Iranian, the Japanese, the Hellenic, and the West, to name only a few - within the scope of his monumental work, he achieved the first all-embracing synthesis of world history. Before Toynbee, world histories were histories of the West, and only specialists wrote...