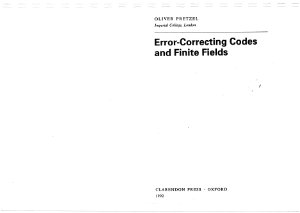 This book arose out of a series of courses given to students of mathematics and electrical engineering at Imperial College. The theory of error-correcting block codes combines mathematical elegance and practical utility to an unusual degree. Thus, the intention of the courses was twofold. On the one hand I wished to introduce the mathematicians to some attractive practical problems and to address,these as an essential part ,.of the development of a mathematical theory. On the other I hoped to persuade engineers ofthe power and elegance of modem mathematics and to give them confidence in using it.
There are many excellent texts on coding theory, notably that by MacWilliams and Sloane, but I found that they were either too advanced for my purposes or stopped short of providing all the mathematical tools required to implement a coding system (like the excellent introductions by Hill or Pless). I therefore wrote my own set of lecture notes, which form the basis of Parts 1-3 of the book. These start with a standard elementary introduction to coding theory, then develop the theory of finite fields (which is an essential tool) and in Part 3, exploit it to construct and decode BCH and Reed-Solomon codes.
I abhor tome-like textbooks that skim over a vast array of topics saying only trivialities about all of them. So this book does require its reader to think. My experience has been that although electrical engineers go through a kind of culture shock as the material on finite fields is presented, they emerge confident that they can apply them in the many areas of their discipline in which they appear. Similarly mathematicians used to abstract, generalities and existence theorems find the conces of coding theory unfamiliar but gain a deeper understanding of the mathematical theory by seeing it at work.
The standard courses at Imperial College covered most of the material in Parts 1-
3. The additional sections (the Extras), were only mentioned, or left out of the course entirely. However, in writing the book, I could not resist the temptation to add a further part on Goppa codes (both classical and geometrical) including the decoder of Skorobogatov and Vladut. This part was tried out in a postgraduate course at the University of London. During that course it became evident that the major difficulty in presenting geometric Goppa codes is to find a simple presentation for the geometry of algebraic curves. Chapters 21-23 are my attempt to do this. I hope that once a reader has worked through the first three parts of the book, these chapters will not present excessive difficulties. In treating Goppa's codes, I have tried to exhibit them as natural generalizations ofBCH codes, and included proofs that BCH codes are a special class of both classical and geometric Goppa codes in the exercises.

Издательство Springer, 2006, -818 pp. The fascinating theory of error-correcting codes is a rather new addition to the list of mathematical disciplines. It grew out of the need to communicate information electronically, and is currently no more than 60 years old. Being an applied discipline by definition, a surprisingly large number of pure mathematical areas tie into Coding Theory. If one were to name just the most important connections, one wo...

Издательство Cambridge University Press, 1995, -355 pp. If anything at all can be deduced from the two quotations at the top of this page, perhaps it is this: Combinatorics is an essential part of the human spirit; but it is a difficult subject foi the abstract, axiomatising Bourbaki school of mathematics to comprehend. Nevertheless, the advent of computers and electronic communications have made it a more important subject than ever. . This is a...

Издательство Springer, 2007, -261 pp. J?nos Bolyai Mathematical Society. The present volume is a collection of survey papers in the fields given in the title. They summarize the latest developments in their respective areas. More than half of the papers belong to search theory which lies on the borderline of mathematics and computer science, information theory and combinatorics, respectively. The volume is slightly related to the twin conferences...

Издательство Cambridge University Press, 2003, -665 pp. Coding theory originated with the 1948 publication of the paper A mathematical theory of communication by Claude Shannon. For the past half century, coding theory has grown into a discipline intersecting mathematics and engineering with applications to almost every area of communication such as satellite and cellular telephone transmission, compact disc recording, and data storage. During t...

Издательство Springer, 2011, -431 pp. Preface to the Second Edition This second edition has been extended with substantial new material, and has been revised and updated throughout. In particular, it offers three new chapters about expander graphs and eigenvalues, the polynomial method and error-correcting codes. Most of the remaining chapters also include new material such as the Kruskal–Katona theorem about shadows, the Lovasz–Stein theorem ab...

Издательство John Wiley, 1998, -163 pp. This book is designed as a textbook. Its aim is to introduce various areas and applications in discrete mathematics via the use of Latin squares. Latin squares have been studied for centuries. They have a very fascinating history and, more important, many practical applications in areas of science, engineering, and statistics as well as being used widely within mathematics itself. In recognition of the sig...

Издательство Prentice-Hall, 1983, -624 pp. This book owes its beginnings to the pioneering work of Claude Shannon in 1948 on achieving reliable communication over a noisy transmission channel. Shannon's central theme was that if the signaling rate of the system is less than the channel capacity, reliable communication can be achieved if one chooses proper encoding and decoding techniques. The design of good codes and of efficient decoding method...

Издательство Springer, 2006, -447 pp. This book has two goals. On the one hand it develops a completely new unifying theory of self-dual codes that enables us to prove a far-reaching generalization of Gleason’s theorem on weight enumerators of self-dual codes. On the other hand it is an encyclopedia that gives a very extensive list of Types of self-dual codes and their properties—the associated Clifford-Weil groups and their invariants, in parti...

Из серии Foundations and Trends in Communications and Information Theory издательства NOWPress, 2004, -97 pp. Elementary number theory was the basis of the development of error correcting codes in the early years of coding theory. Finite fields were the key tool in the design of powerful binary codes and gradually entered in the general mathematical background of communications engineers. Thanks to the technological developments and increased pr...

Crc press, 2000. - 1183 pages. The Handbook of Discrete and Combinatorial Mathematics is the first book presenting a comprehensive collection of reference material for the essential areas of discrete mathematics as well as for important applications to computer science and engineering. Topics include logic and foundations, counting, number theory, abstract and linear algebra, probability, graph theory, networks and optimization, cryptography and...