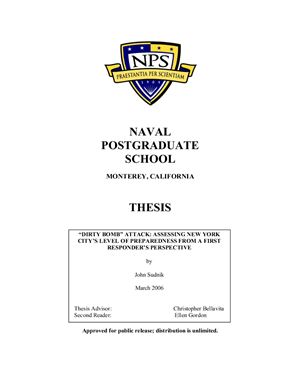 Военно-морская школа последипломного образования (Naval postgraduate school, Califoia), 2006. – 119 с. (на англ. яз.). Специальность: национальная безопасность (homeland security and defense). Past history and recent intelligence have shown that New York City (NYC), a critical node of the U.S. economy, is clearly in the terrorist’s crosshairs. In order to reduce the probability, lessen the risk, and minimize the consequences of a Radiological Dispersion Device (RDD), or dirty bomb, attack, NYC’s first responders must be adequately prepared for its seemingly inevitable occurrence. This particular type of attack on NYC has the potential to create immense panic and confusion on behalf of the general public. Adding to the complexity of the problem is the notion that, since 9/11, the expected actions taken by employees in NYC high-rise office buildings in response to shelter-in-place instructions can be extremely difficult to predict. Therefore, a proposed public awareness campaign and a shelter-in-place plan are two cost-effective and easily implemented terrorism preparedness programs that would build the confidence and increase the capability of the citizenry. Since an RDD incident would likely result in a major inter-agency emergency operation, the unification of command, control, and coordination among NYC’s first responder community is an essential element to its overall success. Hence, an informed and collaborative response by both public and private sector entities could potentially reduce casualties and save lives. Content:
Introduction.
Threats.
Vulnerabilities.
Prevention and response.
Public awareness.
Sheltering-in-place.
Inter-agency command, control, and cooperation.
Conclusions.