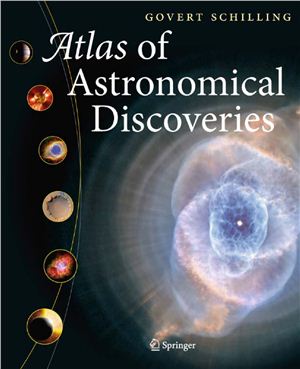 Four hundred years ago in Middelburg, in the Netherlands, the telescope was invented. The invention unleashed a revolution in the exploration of the universe. Galileo Galilei discovered mountains on the Moon, spots on the Sun, and moons around Jupiter. Christiaan Huygens saw details on Mars and rings around Satu. William Herschel discovered a new planet and mapped binary stars and nebulae. Other astronomers determined the distances to stars, unraveled the structure of the Milky Way, and discovered the expansion of the universe. And, as telescopes became bigger and more powerful, astronomers delved deeper into the mysteries of the cosmos. In his Atlas of Astronomical Discoveries, astronomy joualist Govert Schilling tells the story of 400 years of telescopic astronomy. He looks at the 100 most important discoveries since the invention of the telescope.
Похожие разделы
Смотрите также

Bely P.Y. The Design and Construction of Large Optical Telescopes

Springer-Verlag, New York, 2003, 505 pages This book assembles for the first time in a single text the full range of astronomical and engineering principles used in the design and construction of large telescopes. It aims to cover all aspects of the field, from the fundamentals of astronomical observation to optics, control systems, and structural, mechanical, and thermal engineering, as well as such specialized topics as site selection and pro...

Springer, 2009. - 224 pages. Patrick Moore's Practical Astronomy Series This book is truly unique. It is a book that has become necessary because of advancing computer technology. It outlines the techniques involved in making observational sketches and more detailed ‘scientific’ drawings of a wide variety of astronomical subjects using modern digital equipment; primarily PDAs and tablet PCs. Choosing hardware and software is discussed at the beg...

Springer, 2007. - 198 pages. There are two basic methods of recording astronomical images seen through the eyepiece of a telescope. Photography (these days, usually digital imaging with a CCD camera) is one, the other is sketching. Astronomical sketching and drawing has a long and esteemed history. Many astronomers believe it is still unrivalled for recording and illustrating transient phenomena (such as TLPs) or for taking advantage of the f...

На обложке: "The Complete CD Atlas of the Universe". Springer, 2007. - 120 pages. No CD-ROM present here This is without doubt the largest and most comprehensive atlas of the universe ever created for amateur astronomers. It is the first major observing guide for amateurs since Burnhams Celestial Handbook. With finder charts of large-scale and unprecedented detail, in both normal and mirror-image views (for users of the ubiquitous Meade and Cele...

Kambic B. Viewing the Constellations with Binoculars: 250+ Wonderful Sky Objects to See and Explore

Springer, 2009. - 510 Pages. Patrick Moore's Practical Astronomy Series. Viewing the Constellations with Binoculars is a complete guide to practical astronomy, written for beginners, intermediate-level astronomers, and even people who have not yet turned their gaze to the night sky. The required observing equipment to get the full value from this book is no more than a pair of regular 10 x 50 binoculars, but even more can be seen with a small a...

Moore P. Atlas of the Universe

Pugh P. The Science and Art of Using Telescopes

Springer, 2009. - 411 Pages. Amateur astronomers have to start somewhere. Most begin by buying a modest astronomical telescope and getting to know the night sky. After a while, many want to move on to the next stage, but this can be problematic. The magazines advertise a mass of commercially-made equipment – some of it very expensive – which can represent a major financial outlay. The trick is to choose the right equipment, and then use it to it...

Schilling G. The Hunt for Planet X: New Worlds and the Fate of Pluto

Springer, 2009. - 303 pp. Ever since the serendipitous discovery of planet Uranus in 1871, astronomers have been hunting for new worlds in the outer regions of our solar system. This exciting and ongoing quest culminated recently in the discovery of hundreds of ice dwarfs in the Kuiper belt, robbed Pluto from its ‘planet’ status, and led to a better understanding of the origin of the solar system. This timely book reads like a scientific ‘who don...

Springer, 2006. - 196 pages. Not all amateur astronomers who live in a suburban location realize just how very effective a ‘chilled-chip’ astronomical CCD-camera and software can be at cutting through seemingly impenetrable light-pollution. CCD Astrophotography from the Suburbs details one man’s approach to the problem of getting high-quality astronomical images under light-polluted conditions. Adam Stuart has written this reference book for all...

Springer, 2007. - 288 Pages. Patrick Moore's Practical Astronomy Series The advantages of using both eyes for astronomical observing are many and considerable, largely because of the way the human brain processes visual information. Binoculars – the usual kinds – are incredibly useful for wide-field observing, but "binocular astronomy" is much more than that, including binocular eyepieces that can be fitted to normal astronomical telescopes, and...