Schlafly D.L. Jr. The Great White Bear and the Cradle of Culture Italian Images of Russia and Russian Images of Italy 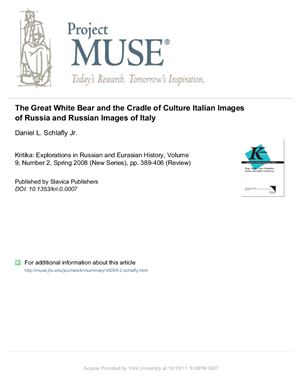 Russia’s image and self-image, perhaps more than
any other country’s, has been shaped from abroad.
It is fitting that the director Aleksandr Sokurov chooses
a foreigner, Astolphe Louis L?onor, Marquis de Custine,
to guide viewers through three centuries of Russian
history and culture in the Hermitage in his 2002 film Russkii
kovcheg (Russian Ark). Since Muscovite times, Russia has
looked to foreign experts, whether Italian architects starting
in the 15th century, some discussed in these volumes;
Greeks consulted by Patriarch Nikon in the 17th century;
or Ukrainian clerics under Aleksei Mikhailovich and Peter I,
followed by a steady stream of foreign statesmen, military
leaders, artists, and scholars. The Pole Adam Jerzy Czartoryski,
the Baltic German Andrei Gotthard Budberg, the Greek
Ioannis Antonios Kapodistrias, and the German Karl Robert
Nesselrode served as Alexander I’s foreign ministers.
Похожие разделы
Смотрите также

Энциклопедия
The Encyclopedia of Russian History is designed to help dispel the mystery of Russia. It is the first encyclopedia in the English language to compre- hend the entirety of Russian history, from ancient Rus to the most recent events in post-Soviet Rus- sia. It is not aimed primarily at specialists in the area but at general readers, students, and scholars who are curious about Russia, have historical events, dates, and persons they wish to explore...

Kelly W.K. The History of Russia: from the Earliest Period to the Present Time. Volume 2

Publisher: Facts on File. Date: 2008. Pages: 310. Format: PDF. Language: English. This book serves as a comprehensive guide to the history and culture of Russia. It covers the history of Russia, the world's largest nation - from its early beginnings in the ninth century when Rurik, a Varangian king, established the first Russian state near Kiev, to the current presidency of Vladimir Putin - is extensive and fascinating.Detailing the social, econo...

Cambridge: Cambridge University Press, 2006. - 794 p. The second volume of The Cambridge History of Russia covers the imperial period (1689-1917). It encompasses political, economic, social, cultural, diplomatic, and military history. All the major Russian social groups have separate chapters and the volume also includes surveys on the non-Russian peoples and the government's policies towards them. It addresses themes such as women, law, the Ort...

Introduction. Chronology. The principles of defense. Design and development. A tour of the sites. The living sites. The sites at war. Aftermatch. The sites today. Bibliography and other reading. Glossary. Index.

Cambridge: Cambridge University Press, 2006. - 824 p. This first volume of the Cambridge History of Russia covers the period from early ('Kievan') Rus' to the start of Peter the Great's reign in 1689. It surveys the development of Russia through the Mongol invasions to the expansion of the Muscovite state in the sixteenth and seventeenth centuries and deals with political, social, economic and cultural issues under the Riurikid and early Romanov...

Romaniello Matthew, Starks Tricia. Tobacco in Russian History and Culture: The Seventeenth Century to the Present

Publisher: Routledge, 2009. 296 pages. Language: English. Tobacco in Russian History and Culture explores tobacco’s role in Russian culture through a multidisciplinary approach starting with the growth of tobacco consumption from its first introduction in the seventeenth century until its pandemic status in the current post-Soviet health crisis. The essays as a group emphasize the ways in which, from earliest contact, tobacco’s status as a "fore...

Cambridge: Cambridge University Press, 2006. - 866 p. The third volume of The Cambridge History of Russia provides an authoritative political, intellectual, social and cultural history of the trials and triumphs of Russia and the Soviet Union during the twentieth century. It encompasses not only the ethnically Russian part of the country but also the non-Russian peoples of the tsarist and Soviet multinational states and of the post-Soviet republ...

Volume 1-3. Boston: J.B. Milett Company, 1910. Russia, the most easterly country of Europe, stretching far away across the whole of Northern Asia to the Far East, abutting on Turkey, Persia, Afghanistan, and the Chinese Empire, is, next to the British, the most powerful empire in the world. Its position and power as affecting the Orient make it an object of overpowering interest to all who have relations with that part of the globe, and few of t...