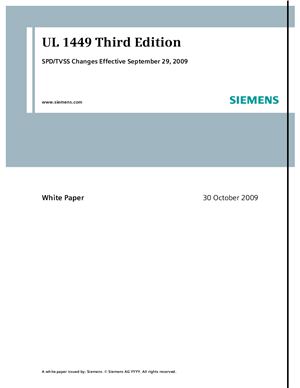 In frustration, Old/Obsolete TVSS may be submitted, which may or may not be UL Listed, or supported in the future

Specifying Engineers may not be getting what they want, or what they think they’re getting
Похожие разделы
Смотрите также

Стандарт
American Petroleum Institute (API) Fourth Edition, September 1995. 23p. This publication covers the safety aspects to be considered when hot tapping, or when welding without hot tapping on in-service piping or equipment. It is not a substitute for job planning. A detailed, written procedure for hot tapping and welding should be prepared or reviewed before starting each job to ensure that all proper steps are taken.

Стандарт
274 стр. American Petroleum Institute, Third Edition, July 2010 This recommended practice is a guide to the designer in organizing an efficient approach to the design of a tension leg platform (TLP). Emphasis is placed on participation of all engineering disciplines during each stage of planning, development, design, construction, installation, and inspection.

API Spec 16A-1997 Specification for Drill Through Equipment

Стандарт
67 стр. American Petroleum Institute, Second Edition, December, 1997 This specification is formulated to provide for the availability of safe and functionally interchangeable drill through equipment utilized for drilling for oil and gas. Technical content provides requirements for performance, design, materials, tests and inspection, welding, marking, handling, storing, and shipping. This specification does not apply to field use or field testing...

Стандарт
63 стр. American Petroleum Institute, First Edition, Januaru, 1993 This specification was formulated to provide for safe and functionally interchangeable surface and eubsea choke and kill systems equipment utilized for drilling oil and gas wells. Other parts of the Choke and ЮН System not specifically addressed in this document shall be in accordance with the applicable sections of this specification. Technical content provides the minimum requir...

Стандарт
415 стр. EFFECTIVE DATE: FEBRUARY 1, 2005 ANSI/API 6A/ISO 10423-2003 This International Standard is based on API Spec 6A, seventeenth edition, February 1996, its errata and supplement, and API Spec 6AV1, first edition, February 1996. The contents of API Spec 14D (upon which ISO 10433 was based) and API Recommended Practice 14H (upon which ISO 10419 was based) have been incorporated in API Spec 6A, seventeenth edition. The International System of...

IEC 61557-9:2009. Electrical safety in low voltage distribution systems up to 1 000 V a.c. and 1 500 V d.c. Equipment for testing, measuring or monitoring of protective measures -Part 9: Equipment for insulation fault location in IT systems