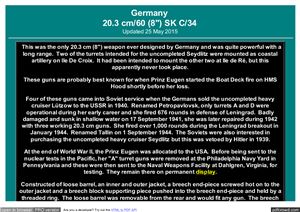 Авторы и издатель не идентифицированы. Документ в pdf-формате. – 8 c. Артиллерийское орудие 203 мм/60 SK C/34 являлось главным калибром тяжелого крейсера Адмирал Хиппер, Блюхер, Принц Ойген (Германия).
This was the only 20.3 cm (8") weapon ever designed by Germany and was quite powerful with a long range. Two of the turrets intended for the uncompleted Seydlitz were mounted as coastal artillery on Ile De Croix. It had been intended to mount the other two at Ile de Ré, but this apparently never took place. These guns are probably best known for when Prinz Eugen started the Boat Deck fire on HMS Hood shortly before her loss. Four of these guns came into Soviet service when the Germans sold the uncompleted heavy cruiser Lützow to the USSR in 1940. Renamed Petropavlovsk, only turrets A and D were operational during her early career and she fired 676 rounds in defense of Leningrad. Badly damaged and sunk in shallow water on 17 September 1941, she was later repaired during 1942 with three working 20.3 cm guns. She fired over 1,000 rounds during the Leningrad breakout in January 1944. Renamed Tallin on 1 September 1944. The Soviets were also interested in purchasing the uncompleted heavy cruiser Seydlitz but this was vetoed by Hitler in 1939.
Похожие разделы