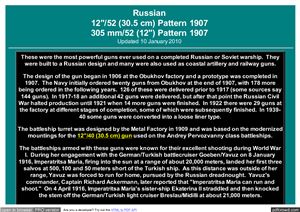 Авторы и издатель не идентифицированы. Документ в pdf-формате. – 8 c. Артиллерийское орудие 305 мм/ 52 клб. обр. 1907 г. являлось главным калибром линкора Императрица Мария (Россия).
These were the most powerful guns ever used on a completed Russian or Soviet warship. They were built to a Russian design and many were also used as coastal artillery and railway guns. The design of the gun began in 1906 at the Obukhov factory and a prototype was completed in 1907. The Navy initially ordered twenty guns from Obukhov at the end of 1907, with 178 more being ordered in the following years. 126 of these were delivered prior to 1917 (some sources say 144 guns). In 1917-18 an additional 42 guns were delivered, but after that point the Russian Civil War halted production until 1921 when 14 more guns were finished. In 1922 there were 29 guns at the factory at different stages of completion, some of which were subsequently finished. In 1939-40 some guns were converted into a loose liner type.
Похожие разделы