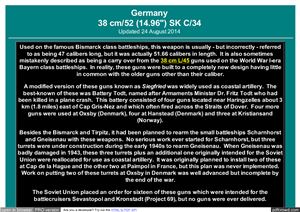 Авторы и издатель не идентифицированы. Документ в pdf-формате. – 11 c. Артиллерийское орудие 380 мм/52 SK C/34 являлось главным калибром линейных кораблей Бисмарк, Тирпитц (Германия).
Used on the famous Bismarck class battleships, this weapon is usually - but incorrectly – referred to as being 47 calibers long, but it was actually 51.66 calibers in length. It is also sometimes mistakenly described as being a carry over from the 38 cm L/45 guns used on the World War I-era Baye class battleships. In reality, these guns were built to a completely new design having little in common with the older guns other than their caliber.
A modified version of these guns known as Siegfried was widely used as coastal artillery. The best-known of these was Battery Todt, named after Armaments Minister Dr. Fritz Todt who had been killed in a plane crash. This battery consisted of four guns located near Haringzelles about 3 km (1.8 miles) east of Cap Gris-Nez and which often fired across the Straits of Dover. Four more guns were used at Oxsby (Denmark), four at Hanstead (Denmark) and three at Kristiansand (Norway).
Besides the Bismarck and Tirpitz, it had been planned to rearm the small battleships Schahorst and Gneisenau with these weapons. No serious work ever started for Schahorst, but three turrets were under construction during the early 1940s to rearm Gneisenau. When Gneisenau was badly damaged in 1943, these three turrets plus an additional one originally intended for the Soviet Union were reallocated for use as coastal artillery. It was originally planned to install two of these at Cap de la Hague and the other two at Paimpol in France, but this plan was never implemented.
Work on putting two of these turrets at Oxsby in Denmark was well advanced but incomplete by the end of the war.
The Soviet Union placed an order for sixteen of these guns which were intended for the battlecruisers Sevastopol and Kronstadt (Project 69), but no guns were ever delivered. Другие источники таблиц стрельбы артиллерийского орудия 38cm/52 SK C/34:
Графический вид таблиц стрельбы - /file/1722691/
Табличный вид таблиц стрельбы - /file/1723073/
Табличный вид таблиц стрельбы (в статье) - /file/1588456/
Тактико-технические характеристики и таблица стрельбы - /file/1723204/
Похожие разделы