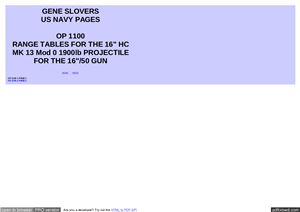 Авторы и издатель не идентифицированы. – 32 c. The 16"(406 mm)/50 caliber Mark 7 – United States Naval Gun was the main armament of the Iowa-class battleships.
Due to a lack of communication during design, the Bureau of Ordnance assumed the Iowa class would use the 16"/50 Mark 2 guns constructed for the 1920 South Dakota-class battleships. However, the Bureau of Construction and Repair assumed that the ships would carry a new, lighter, more compact 16"/50 and designed the ships with barbettes too small to accommodate a 16"/50 Mark 2 three-gun turret. The new 16"/50 Mark 7 was designed to resolve this conflict.
These guns were 50 calibers long—or 50 times their 16-inch (406 mm) bore diameter which makes the barrels 66.6 feet (20 m) long, from breechface to muzzle. Each gun weighed about 239,000 pounds (108,000 kg) without the breech, or 267,900 pounds (121,517 kg) with the breech. They fired projectiles weighing from 1,900 to 2,700 pounds (850 to 1,200 kg) at a maximum speed of 2,690 feet per second (820 m/s) with a range of up to 24 miles (39 km). At maximum range the projectile spent almost 1½ minutes in flight. Each turret required a crew of 79 men to operate. The turrets themselves cost US$1.4 million each, to which the cost of the guns had to be added.
The turrets (technically they are "gunhouses") were "three-gun", not "triple", because each barrel could be elevated and fired independently. The ships could fire any combination of their guns, including a broadside of all nine. The turret interiors were subdivided and so designed as to permit the independent loading, elevation and firing of each gun. Each turret was also installed with an optical range finder and ballistic analog computer. This permitted the turret’s gun captain and crew to locally engage targets, should battle damage disrupt communication with the ship’s primary or auxiliary fire control centers. Contrary to popular belief, the ships did not move sideways noticeably when a broadside was fired; this is simply an illusion. With the enormous mass of the vessel and the damping effect of the water around the hull the pressure wave generated by the gunfire was felt much more than the slight change in lateral velocity.
The guns could be elevated from −5 degrees to +45 degrees, moving at up to 12 degrees per second. The turrets could rotate about 300 degrees at about 4 degrees per second and could even be fired back beyond the beam, which is sometimes called "over the shoulder". Within each turret, a red stripe on the wall of the turret, just inches from the railing, marked the boundary of the gun's recoil, providing the crew of each gun turret with a visual reference for the minimum safe distance range.
Complementing the 16"/50 caliber Mark 7 gun was a fire control computer, in this case the Ford Instrument Company Mark 8 Range Keeper. This analog computer was used to direct the fire from the battleship's big guns, taking into account several factors such as the speed of the targeted ship, the time it takes for a projectile to travel, and air resistance to the shells fired at a target. At the time the Montana class was set to begin construction, the rangekeepers had gained the ability to use radar data to help target enemy ships and land-based targets. The results of this advance were telling: the rangekeeper was able to track and fire at targets at a greater range and with increased accuracy. This gave the US Navy a major advantage in World War II, as the Japanese did not develop radar or automated fire control to the level of the US Navy.
Похожие разделы