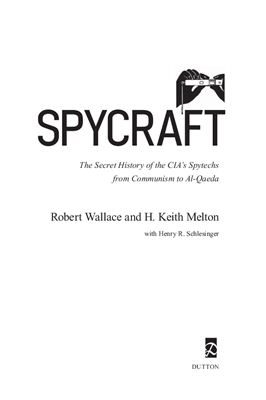 From two men who know better than anyone how espionage really works, an unprecedented history heavily illustrated with neverbefore- seen images of the CIA's most secretive operations and the gadgets that made them possible.

It is a world where the intrigue of reality exceeds that of fiction. What is an invisible photo used for? What does it take to build a quiet helicopter? How does one embed a listening device in a cat? If these sound like challenges for Q, James Bond's fictional gadget-master, think again. They're all real-life devices created by the CIA's Office of Technical Service an ultrasecretive department that combines the marvels of state-of-the-art technology with the time-proven traditions of classic espionage. And now, in the first book ever written about this office, the former director of OTS teams up with an inteationally renowned intelligence historian to take readers into the laboratory of espionage.

Spycraft tells amazing life and death stories about this littleknown group, much of it never before revealed. Against the backdrop of some of America's most critical periods in recent history including the Cold War, the Cuban Missile Crisis, and the war on terror the authors show the real technical and human story of how the CIA carries out its missions.
Похожие разделы
Смотрите также

Publisher: Cambridge University Press, 2003. 406 pages. Language: English. This collection of essays by leading international experts offers an up-to-date, comprehensive history and analysis of multiple cases of genocide and genocidal acts, with a focus on the twentieth century. The book contains studies of the Armenian genocide, the victims of Stalinist terror, the Holocaust, and imperial Japan. Several authors explore colonialism and address t...

Wadsworth Publishing, 2008 - 973 p. For courses entitled World Civilizations or World History. Volume II can be used for Modern World History. Courses are generally two semesters or three quarters in length and are Freshman/Sophomore level. Some schools offer a one-semester course - these are usually for people who are becoming teachers and may be taught out of the School of Education. This is a growing course, and it may be replacing Western Ci...

Henry Madeleine M. Prisoner of History: Aspasia of Miletus and Her Biographical Tradition

USA: Oxford University Press, 1995 - 208 p. According to legend, Aspasia of Miletus was a courtesan, the teacher of Socrates, and the political adviser of her lover Pericles. Next to Sappho and Cleopatra, she is the best known woman of the ancient Mediterranean. Yet continued uncritical reception of her depiction in Attic comedy and naive acceptance of Plutarch's account of her in his Life of Pericles prevent us from understanding who she was an...

Hailed as the most extensive photographic record of the naval side of World War II ever produced, this book is a must for anyone interested in naval history. From Robert Capa's images of the mayhem on Omaha Beach to the amateur photography of a serviceman on board a destroyer, the collection offers a moving and informative look at all theaters. The introduction of the 35-mm camera and the easing of censorship allowed photographers to get close to...