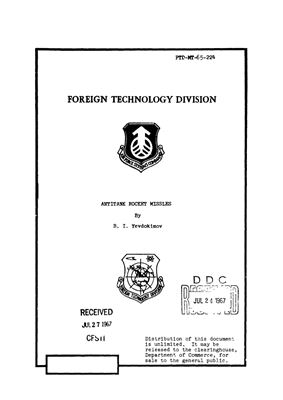 Edited machine translation from Russian. — Foreign technology division, 1967. — 94 p. This pamphlet gives a popular treatment of the problems of design and combat application of antitank guided missiles (ATGM, ПТУР). It relates the reasons that prompted the development of these missiles and the classification of ATGM's according to the most important criteria. After an acquaintance with the general concept of an ATGM, a more detailed account is given of the basic principles of designing the individual components of the ATGM (rocket engines, airframes, and so forth). For an understanding of the principles of action of the individual ATGM components, brief information is given from aerodynamics, the theory of gyroscopes, and electronics. The pamphlet discusses the methods of firing antitank guided missiles and the procedures of firing instruction. Problems conceing the combat application of ATGM for various types of troops and for the most important forms of combat are outlined. Brief performance characteristics of contemporary ATGM's are given and the means for their further development are discussed.
Furthermore, a brief description of contemporary unguided antitank rocket, weapons is presented. The pamphlet was written on the basis of material of the foreign press and does not pretend to give an exhausting account of all the problems connected with the fundamentals of design and the principles of combat utilization of ATGM's. The pamphlet is intended for an extremely wide range of military and civilian readers who are interested in new military equipment and its combat application. Contents:
General information conceing the design of ATGM and their classification.
ATGM warhead
ATGM rocket engine.
Antitank guided missiles ATGM airframe.
ATGM stabilization during flight.
ATGM guidance system.
ATGM launchers.
ATGM arrangement in the firing position, firing methods, and firing instructions.
Combat use of ATGM's.
Performance characteristics of certain ATGM's.
Похожие разделы