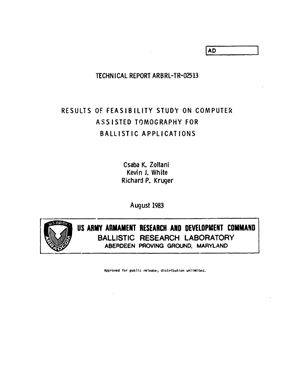 Technical report ARBRL-TR-02513, US Army Ballistic Research Laboratory. Aberdeen Proving Ground, Maryland, 1983. — 50 p. Tomography, a noninvasive technique relying on the use of x-ray absorption characteristics of a body taken at multiple angles, allows, through the use of mathematical reconstruction techniques, the determination of unknown density distributions within an object. Here we describe the requirements on such a system for ballistic applications, especially for the study of two-phase flow in a chamber under actual firing conditions. The results of experiments on a static mock-up were used to illustrate the possibilities and limitations of the proposed system. The mock-up consisted of a fiberglass chamber loaded with inert granular propellant. 180 sets of projection data were taken by moving in a semicircle around the object and stepping by one degree each time. Two different algorithms were used to reconstruct the cross-sectional image of the chamber and propellant grain distribution. Transient ballistic requirements dictate that as few as possible views, i.e., x-ray sources, be used in the actual system design.
With 180 views, excellent reconstruction images were obtained. Details such as propellant perforations (1.0 mm) are easily observed. Even with 15 to 20 views, reasonable reconstruction can be achieved and will be the basis of the initial BRL design. The quality deteriorated when only nine (9) views were used in the reconstruction.
One-dimensional Monte Carlo radiation transport calculations were performed for a chamber of various wall thicknesses and materials containing propellant. This configuration simulated a gun chamber. The calculations gave the scattered, transmitted and absorbed photon fraction and energy distribution as a function of x-ray energy input. For a typical chamber configuration, from 3% to 24% of the x-ray energy is transmitted to the detector. The ratio of forward scattered photon fraction to transmitted photon fraction was found to decrease with increasing input x-ray energy although the code could not give an angular distribution. Image contrast calculations were also carried out by varying the amount of propellant in the chamber and determining the variation of the transmitted and scattered photon fraction. Results indicated no contrast problem in this area. Finally, a description of the source, the detectors, the problems attendant upon the X-ray spectrum variation, an overview of the image reconstruction techniques, and the layout of the system to be built at the Ballistic Research Laboratory (BRL) are given. Contents:
Introduction.
Principles of tomography.
Ballistic requirements.
Results of static experiments.
Proposed BRL system.
Detection systems.
Conclusions.
Похожие разделы