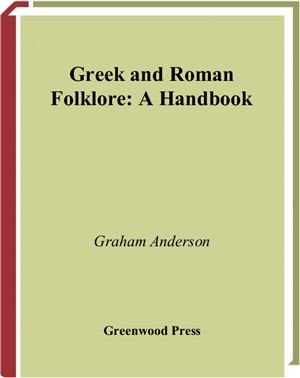 The Greek and Roman world is often noted for the rationalism of a few outstanding thinkers. This book is about the traditional superstitions, beliefs, taboos, folk-remedies, ghost stories, and folk tales that haunted the rest. Along the way it considers such questions as, Do mode approaches help or hinder our attempts to see ancient superstition from the inside? Can we break down the barriers between folk tales and myths? Did it really matter whether a healing herb was picked by moonlight or not? Was there a Cinderella tale in the ancient world?

The volume begins by asking how we can attempt to define folklore in the first place, and how we can make sense of the vast amount of materials available. It examines the prejudices of writers who report folkloric information and explores the cultural contexts that shaped their materials. It includes numerous examples and texts, such as tales, legends, proverbs, jokes, riddles, and traditional customs. The volume overviews critical approaches to the study of ancient folklore, and it surveys the presence of Greek and Roman folklore in classical culture. Because of the tremendous interest in the ancient world, this volume will meet the needs of high school students and general readers.
Смотрите также

Folklore Fellows' Communications No. 3. Helsinki : Suomalaisen Tiedeakatemian Toimituksia, 1910. Aarne devised a catalogue (classification system) of the types of international folktales. This initial catalogue was developed and published in 1910 by Aarne under the title "Index of Types of Folktale" in German. Aarne's system was devised to organize and index Scandinavian collections. Aarne's system was translated and enlarged by the American fo...

Ben-Amos D. The Idea of Folklore: an Essay

ABC-CLIO, Inc. 2002 Students at the high-school level and above who are doing research on Egyptian mythology will find this volume interesting and helpful. The first chapter discusses the nature of myths and the history of Egypt from the predynastic to the postpharaonic period. The second goes through several myth complexes and cycles and their variations. The third chapter, "Deities, Themes, and Concepts, " is an alphabetical listing of well ov...

ABC-CLIO, 1998. - 932 pages. A comprehensive two-volume reference set providing an overview of the study of folklore, this text comprises over 200 articles contributed by European and North American scholars. The various forms of folk culture covered include the ballad, riddle, legend and myth, whilst character types include the hero, fool and trickster. This volume is a comprehensive general reference work for students, scholars, and general r...

Series: Demons, Spirits and Witches | Publication Date: August 30, 2005 Focuses on the problem of communication with the other world: the phenomenon of spirit possession and its changing historical interpretations, the imaginary schemes elaborated for giving accounts of the journeys to the other world, for communicating with the dead, and finally the historical archetypes of this kind of religious manifestation-trance prophecy, divination, and s...

Monaghan Patricia. The Encyclopedia of Celtic Mythology and Folklore

Энциклопедия
New York: Facts on File, 2004. - 512 p. What we know today as Celtic culture is based in part upon biased literature written by enemies of the Celts, and in part upon oral traditions written down in medieval or later times in lands where the Celts mingled with other tribal people; both sources raise questions even as they answer them. But scholars have other ways of finding information about the Celts that are not reliant upon these potentially...

Oxford University Press, 2000. - 411 pages. With 1250 entries ranging from dragons to Mother Goose, May Day to Michaelmas, this enchanting dictionary unfurls the colorful history behind the holidays, customs, legends, and superstitious beliefs of England. Ever wonder why we kiss under the mistletoe at Christmas or think a rabbit's foot brings good luck? Two folklore authorities provide reliable and often surprising answers to these and other c...