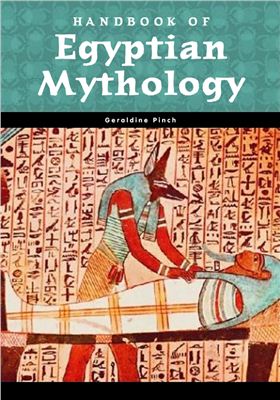 Students at the high-school level and above who are doing research on Egyptian mythology will find this volume interesting and helpful. The first chapter discusses the nature of myths and the history of Egypt from the predynastic to the postpharaonic period. The second goes through several myth complexes and cycles and their variations. The third chapter, "Deities, Themes, and Concepts, " is an alphabetical listing of well over 100 topics and is the meat of the book. Articles range in length from a single line to several pages. All have see also references, and most cite both secondary and primary sources. Entries are readable and note where particular deities absorbed characteristics of others during historical periods. The inconsistencies of Egyptian mythology are noted, as in the variations of the Osiris stories. The frankly sexual nature of many of Egypt's creation myths is not glossed over, nor are the coupling habits of the gods.
A final chapter is an annotated list of print and nonprint resources on Egyptian myth, some of which may be found in many larger public and academic libraries. A few novels influenced by Egyptian myth are also listed and annotated, including Norman Mailer's Ancient Evenings and Elizabeth Peters' The Snake, the Crocodile, and the Dog. A few videos are reviewed, and several Web sites and CD-ROMs are listed. Pinch's annotations are clear and informative and not without a certain dry humor.

A very helpful glossary defines Egyptian words and other terms that are commonly used in Egyptology. The appendix listing primary sources would be of most use to college students beginning to study Egyptian mythology or Egyptology. This volume is recommended for medium-sized and large public libraries and academic libraries with lower-division mythology and Egyptology classes. It joins others of the publisher's Handbooks of World Mythology, including Handbook of Mesoamerican Mythology (2002) and Handbook of Norse Mythology (2001). RBB
Copyright © American Library Association. All rights reserved
Похожие разделы
Смотрите также

Book Description. Series: Greenwood Folklore Handbooks | Publication Date: August 30, 2006 The Greek and Roman world is often noted for the rationalism of a few outstanding thinkers. This book is about the traditional superstitions, beliefs, taboos, folk-remedies, ghost stories, and folk tales that haunted the rest. Along the way it considers such questions as, Do modern approaches help or hinder our attempts to see ancient superstition from the...

Publication Date: January 1, 2007 The authors-recognized historians, ethnologists, folklorists coming from four continents-present the latest research findings on the relationship, coexistence and conflicts of popular belief systems, Judeo-Christian mythology and demonology in medieval and modern Europe. The present volume focuses on the divergence between Western and Eastern evolution, on the different relationship of learned demonology to popu...

Series: Demons, Spirits and Witches | Publication Date: August 30, 2005 Focuses on the problem of communication with the other world: the phenomenon of spirit possession and its changing historical interpretations, the imaginary schemes elaborated for giving accounts of the journeys to the other world, for communicating with the dead, and finally the historical archetypes of this kind of religious manifestation-trance prophecy, divination, and s...

Monaghan Patricia. The Encyclopedia of Celtic Mythology and Folklore

Энциклопедия
New York: Facts on File, 2004. - 512 p. What we know today as Celtic culture is based in part upon biased literature written by enemies of the Celts, and in part upon oral traditions written down in medieval or later times in lands where the Celts mingled with other tribal people; both sources raise questions even as they answer them. But scholars have other ways of finding information about the Celts that are not reliant upon these potentially...