Austin J.L. How to do things with words 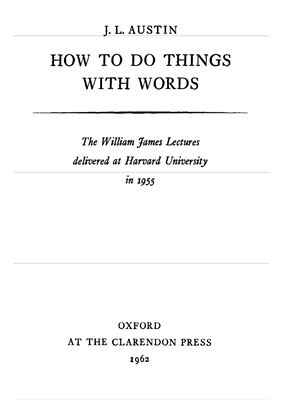 How to Do Things With Words is perhaps Austin's most influential work. In it he attacks what was at his time a predominant account in philosophy, namely, the view that the chief business of sentences is to state facts, and thus to be true or false based on the truth or falsity of those facts. In contrast to this common view, he argues, truth-evaluable sentences form only a small part of the range of utterances. After introducing several kinds of sentences which he assumes are indeed not truth-evaluable, he tus in particular to one of these kinds of sentences, which he deems performative utterances. These he characterises by two features:

* First, to utter one of these sentences is not just to "say" something, but rather to perform a certain kind of action.
* Second, these sentences are not true or false; rather, when something goes wrong in connection with the utterance then the utterance is, as he puts it, "infelicitous", or "unhappy".
Похожие разделы
Смотрите также

Мизин Т.О. Lectures in contrastive lexicology of the english and ukrainian languages

(Cambridge Textbooks in Linguistics). Hardcover: 248 pages. Publisher: Cambridge University Press. Edition: 2 edition. Date: October 8, 2001. Language: English. This book is a concise and accessible introduction to the ways in which relations between words in sentences are marked in languages. The author describes the systems of suffixes familiar from languages like Latin and also the roles of prepositions, postpositions and the use of the pronom...

Статья
Курс лекций, Universit?t Bielefeld, 1996, -75 pp. This seminar will cover an area of English which has recently come to be called `morphosemantics' (by analogy with notions such as `morphotactics' and `morphophonology'. We will be referring to a number of recent studies in morphology and examining their contribution to the study of the semantics of composite (derived or compound) words. Emphasis will be placed on the development of coherent sem...

First published 2003 by Routledge, London. This edition published in the Taylor & Francis e-Library, 2004. ISBN: 0415286212 The Language of Children: - focuses on the language produced by children, and includes a wide variety of authentic data, from records of children’s first words to emails; - introduces the student to ways of analysing data, from multimodal texts to transcripts of talk during play; - explores the language of children from...

Publisher: Prentice Hall. Publication date: September 1982. Number of pages: 160. Format / Quality: PDF. Analyzing English: An Introduction to Descriptive Linguistics (Language Courses). "Lexicology deals not only with simple words in all their aspects but also with complex and compound words, the meaningful units of language. Since these units must be analysed in respect of both their form and their meaning, lexicology relies on information deri...

Cambridge Introductions to Language and Linguistics Pages: 220 Publisher: Cambridge University Press (2009) Quality: good: pdf Morphology is the study of how words are put together. A lively introduction to the subject, this textbook is intended for undergraduates with relatively little background in linguistics. Providing data from a wide variety of languages, it includes hands-on activities such as 'challenge boxes', designed to encourage stud...

Morris Michael. An Introduction to the Philosophy of Language

Cambridge Introductions to Philosophy Pages: 338 Publisher: Cambridge University Press (2007) Quality: good: pdf In this textbook, Michael Morris offers a critical introduction to the central issues of the philosophy of language. Each chapter focusses on one or two texts which have had a seminal influence on work in the subject, and uses these as a way of approaching both the central topics and the various traditions of dealing with them. Texts...

Издательство Oxford University Press, 2004, -430 pp. When people speak to each other they are able to communicate subtle nuances of expression. Everybody does this, no matter how young or old, or which language they are speaking: the existence of expression as an integral part of how speech is spoken is universal. This does not mean that every language or speaker expresses everything in exactly the same way: they do not. The expression people br...