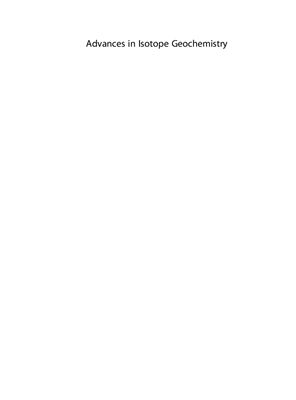 Applications of radioactive and stable isotopes have revolutionized our understanding of the Earth and near-earth surface processes. The utility of the isotopes are ever-increasing and our sole focus is to bring out the applications of these isotopes as tracers and chronometers to a wider audience so that they can be used as powerful tools to solve environmental problems. New developments in this field remain mostly in peer-reviewed joual articles and hence our goal is to synthesize these findings for easy reference for students, faculty, regulators in govemental and non-govemental agencies, and environmental companies. While this volume maintains its rigor in terms of its depth of knowledge and quantitative information, it contains the breadth needed for wide variety problems and applications in the environmental sciences. This volume presents all of the newer and older applications of isotopes pertaining to the environmental problems in one place that is readily accessible to readers. This book not only has the depth and rigor that is needed for academia, but it has the breadth and case studies to illustrate the utility of the isotopes in a wide variety of environments (atmosphere, oceans, lakes, rivers and streams, terrestrial environments, and sub-surface environments) and serves a large audience, from students and researchers, regulators in federal, state and local govements, and environmental companies.

Изд-во Cambridge University Press, 2008 г., 534p. (на англ. языке, текстовый слой есть) Radiogenic and stable isotopes are used widely in the earth sciences to determine the ages of rocks, meteorites and archeological objects, and as tracers to understand geological and environmental processes. Isotope methods determine the age of the Earth, help reconstruct the climate of the past, and explain the formation of the chemical elements in the Univer...

Hatfield J.L., Gandini A. (eds.) Nitrogen in the Environment

Изд-во Springer, 2009 г., 293 с. Stable Isotope Geochemistry is an introduction to the use of stable isotopes in the geosciences. It is subdivided into three parts: theoretical and experimental principles; fractionation processes of light and heavy elements; the natural variations of geologically important reservoirs. Since the application of stable isotopes to earth sciences has grown in the last few years, a new edition appears necessary. Rece...

2nd ed. Cambridge University Press. 2004. 302 p. Noble Gas Geochemistry gives a comprehensive description of the physical chemistry and cosmochemistry of noble gases, before leading on to applications for problem-solving in the earth and planetary sciences. There have been many developments in the use of the noble gases since publication of the first edition of this book in 1983. This second edition has been fully revised and updated. The book w...