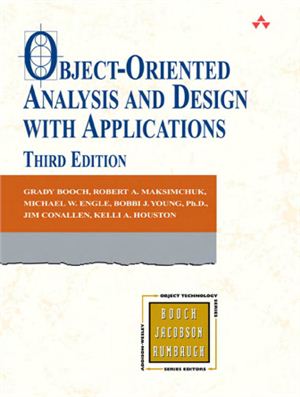 Object-Oriented Analysis and Design with Applications has long been the essential reference to object-oriented technology, which, in tu, has evolved to join the mainstream of industrial-strength software development. In this third edition -- the first revision in 13 years -- readers can lea to apply object-oriented methods using new paradigms such as Java, the Unified Modeling Language (UML) 2.0, and .NET.

The authors draw upon their rich and varied experience to offer improved methods for object development and numerous examples that tackle the complex problems faced by software engineers, including systems architecture, data acquisition, cryptoanalysis, control systems, and Web development. They illustrate essential concepts, explain the method, and show successful applications in a variety of fields. You'll also find pragmatic advice on a host of issues, including classification, implementation strategies, and cost-effective project management.

New to this new edition are
* An introduction to the new UML 2.0, from the notation's most fundamental and advanced elements with an emphasis on key changes
* New domains and contexts
* A greatly enhanced focus on modeling--as eagerly requested by readers--with five chapters that each delve into one phase of the overall development lifecycle.
* Fresh approaches to reasoning about complex systems
* An examination of the conceptual foundation of the widely misunderstood fundamental elements of the object model, such as abstraction, encapsulation, modularity, and hierarchy
* How to allocate the resources of a team of developers and mange the risks associated with developing complex software systems
* An appendix on object-oriented programming languages

This is the seminal text for anyone who wishes to use object-oriented technology to manage the complexity inherent in many kinds of systems.

Now widely adopted as the de facto industry standard and sanctioned by the Object Management Group, the Unified Modeling Language (UML) is a notation all software developers need to know and understand. However, the UML is a big language, and not all of it is equally important. The award-winning first edition of UML Distilled was widely praised for being a concise guide to the core parts of the UML and has proved extremely successful in helping d...

Modelica® - A Unified Object-Oriented Language for Physical Systems Modeling Language Specification, Version 3.1 May 27, 2009 , 236 pages. Abstract This document defines the Modelica1 language, version 3.1, which is developed by the Modelica Association, a non-profit organization with seat in Link?ping, Sweden. Modelica is a freely available, object-oriented language for modeling of large, complex, and heterogeneous physical systems. It is suite...

Bonn - Boston: SAP Press; Galileo Press, 2009. - 357 p. If you re an ABAP application developer with basic ABAP programming skills, this book will teach you how to think about writing ABAP software from an object-oriented (OO) point of view, and prepare you to work with many of the exciting ABAP-based technologies in ABAP Objects (release 7.0). Using this comprehensive book as your guide, you can make the switch to object-oriented programming ef...