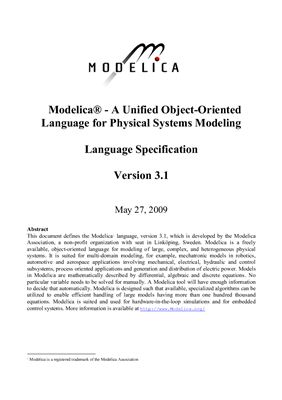 Abstract
This document defines the Modelica1 language, version 3.1, which is developed by the Modelica
Association, a non-profit organization with seat in Link?ping, Sweden. Modelica is a freely
available, object-oriented language for modeling of large, complex, and heterogeneous physical
systems. It is suited for multi-domain modeling, for example, mechatronic models in robotics,
automotive and aerospace applications involving mechanical, electrical, hydraulic and control
subsystems, process oriented applications and generation and distribution of electric power. Models
in Modelica are mathematically described by differential, algebraic and discrete equations. No
particular variable needs to be solved for manually. A Modelica tool will have enough information
to decide that automatically. Modelica is designed such that available, specialized algorithms can be
utilized to enable efficient handling of large models having more than one hundred thousand
equations. Modelica is suited and used for hardware-in-the-loop simulations and for embedded
control systems. More information is available at http://www.Modelica.org/
Похожие разделы
Смотрите также

Addison-Wesley, 2007., - 717 p. Object-Oriented Analysis and Design with Applications has long been the essential reference to object-oriented technology, which, in turn, has evolved to join the mainstream of industrial-strength software development. In this third edition -- the first revision in 13 years -- readers can learn to apply object-oriented methods using new paradigms such as Java, the Unified Modeling Language (UML) 2.0, and .NET. Th...

Now widely adopted as the de facto industry standard and sanctioned by the Object Management Group, the Unified Modeling Language (UML) is a notation all software developers need to know and understand. However, the UML is a big language, and not all of it is equally important. The award-winning first edition of UML Distilled was widely praised for being a concise guide to the core parts of the UML and has proved extremely successful in helping d...

Bonn - Boston: SAP Press; Galileo Press, 2009. - 357 p. If you re an ABAP application developer with basic ABAP programming skills, this book will teach you how to think about writing ABAP software from an object-oriented (OO) point of view, and prepare you to work with many of the exciting ABAP-based technologies in ABAP Objects (release 7.0). Using this comprehensive book as your guide, you can make the switch to object-oriented programming ef...