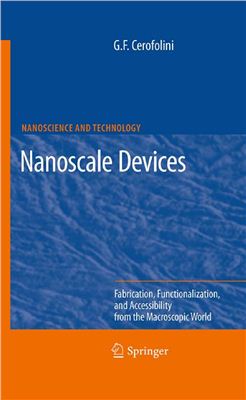 This book is written in that spirit: I intend to show that circuits formed by a planar arrangement of nanoscopic devices with density of the order of 10^11 cm^-2 can in principle be prepared via the combination of existing architectures, materials, and techniques. Whether or not that combination may indeed become a technology for nanoelectronics is essentially related to the effort spent in the solution of detailed problems that certainly will arise in such an attempt.

Although the temporal constraint does not apply to other devices (like sensors or electromechanical systems), their practical implementation would be greatly simplified if they too were based on some conservative extension of the current technology.

Although the topics considered in this book are highly technical, I have tried to maintain unity of style, privileging logical connections with respect to detailed information. Because of its formative, rather than informative character, this book (or at least its first part) might be used for courses on Nanoscience or Nanotechnology. A possible use of this book as a textbook is sketched in Fig. 0.1, where the backbone sketches the main body of the course, whereas the sides show possible additional topics.

The core of this book is based on two review articles: Molecular electronics in silico, Appl. Phys. A 91, 181 (2008), with E. Romano; and Multispacer patteing: a technology for the nano era, to appear in Handbook of Nanophysics, edited by K. Sattler for Taylor & Francis (to be published), with E. Romano and P. Amato. In tu, they had origin from a series of lectures prepared for the 2007 and 2008 Summer Schools on Nanoelectronic Circuits at Tools held at the Ecole Polytechnique
Federale de Lausanne (Swiss).

Справочник
2nd Edition, Publisher: CRС Prеss, 2007, 1080 pages The ability to study and manipulate matter at the nanoscale is the defining feature of 21st-century science. The first edition of the standard-setting Handbook of Nanoscience, Engineering, and Technology saw the field through its infancy. Reassembling the preeminent team of leading scientists and researchers from all areas of nanoscience and nanotechnology along with several new pioneers, thi...

NATO Science Series II: Mathematics, Physics and Chemistry – Vol. 233. Springer, 2006. 398 p. ISBN-10 1-4020-5105-0 This book contains a collection of papers giving insight into the fundamentals and applications of nanoscale devices. The papers have been presented at NATO Advanced Research Workshop on Nanoscale Devices – Fundamentals and Applications (NDFA-2004, ARW 980607) held in Kishinev (Chi?inau), Moldova, on September 18-22, 2004. The main...

World Scientific, 2011, 374 pages The scope of this book will be focused on the interface issues and problems in organic materials as electronic device applications. The organic material electronics is a rapidly progressing field for potential applications in flexible field effect transistors, plastic solar cells, organic luminescent devices, etc. However, the performance of these organic devices is still not sufficient. To enhance the under...

Wiley, 2006. - 482 p. - This is the first book to combine both nanodevice assembly from biomaterials as well as nanodevices of non-biological materials, providing systematic coverage of how both kinds can be used in the context of nanoscale life science research and development. From the contents: Chapter 1: The Physics and Modeling of Biofunctionalized Nanoelectromechanical Systems. Chapter 2: Mathematical and Computational Modeling: Towards the...

CRC Press, 2007. - 912 pages. There are fundamental and technological limits of conventional microfabrication and microelectronics. Scaling down conventional devices and attempts to develop novel topologies and architectures will soon be ineffective or unachievable at the device and system levels to ensure desired performance. Forward-looking experts continue to search for new paradigms to carry the field beyond the age of microelectronics, and...

Cambridge University Press, 2010. - 431 pp. The properties of new nanoscale materials, their fabrication and applications, as well as the operational principles of nanodevices and systems, are solely determined by quantum-mechanical laws and principles. This textbook introduces engineers to quantum mechanics and the world of nanostructures, enabling them to apply the theories to numerous nanostructure problems. The book covers the fundamentals of...

Springer-Verlag, Berlin, 2009, 587 pages Heat transfer laws for conduction, radiation and convection change when the dimensions of the systems in question shrink. The altered behaviours can be used efficiently in energy conversion, respectively bio- and high-performance materials to control microelectronic devices. To understand and model those thermal mechanisms, specific metrologies have to be established. This book provides an overview of act...

Springer, 2010. - 239 p. - Nanophotonics draws upon cross-disciplinary expertise from physics, materials science, chemistry, electrical engineering, biology, and medicine to create novel technologies to meet a variety of challenges. This is the first book to focus on novel materials and techniques relevant to the burgeoning area of nanoscale photonics and optoelectronics, including novel-hybrid materials with multifunctional capabilities and rece...

Справочник
Academic Press, Amsterdam, 2010, 296 pages Many of the devices and systems used in modern industry are becoming progressively smaller and have reached the nanoscale domain. Nanofabrication aims at building nanoscale structures, which can act as components, devices, or systems, in large quantities at potentially low cost. Nanofabrication is vital to all nanotechnology fields, especially for the realization of nanotechnology that involves the trad...