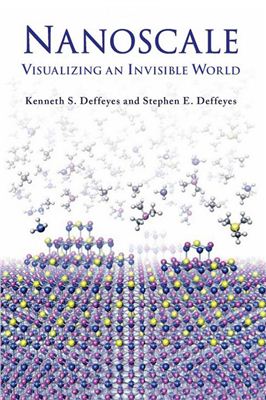 The world is made up of structures too small to see with the naked eye, too small to see even with an electron microscope. Einstein established the reality of atoms and molecules in the early 1900s. How can we see a world measured in fractions of nanometers? (Most atoms are less than one nanometer, less than one-billionth of a meter, in diameter.) This beautiful and fascinating book gives us a tour of the invisible nanoscale world. It offers many vivid color illustrations of atomic structures, each accompanied by a short, engagingly written essay. The structures advance from the simple (air, ice) to the complex (supercapacitator, rare earth magnet). Each subject was chosen not in search of comprehensiveness but because it illustrates how atomic structure creates a property (such as hardness, color, or toxicity), or because it has a great story, or simply because it is beautiful. Thus we lea how diamonds ride volcanoes to the earth's surface (if they came up more slowly, they'd be graphite, as in pencils); what form of carbon is named after Buckminster Fuller; who won in the x-ray vs. mineralogy professor smackdown; how a fuel cell works; when we use spinodal decomposition in our daily lives (it involves hot water and a package of Jell-O), and much more. The amazing color illustrations by Stephen Deffeyes are based on data from x-ray diffraction (a method used in crystallography). They are not just pretty pictures but visualizations of scientific data derived directly from those data. Together with Kenneth Deffeyes's witty commentary, they offer a vivid demonstration of the diversity and beauty found at the nanometer scale.
Похожие разделы
Смотрите также

World Scientific, 2011, 374 pages The scope of this book will be focused on the interface issues and problems in organic materials as electronic device applications. The organic material electronics is a rapidly progressing field for potential applications in flexible field effect transistors, plastic solar cells, organic luminescent devices, etc. However, the performance of these organic devices is still not sufficient. To enhance the under...

2nd Edition, Wiley, 2009, 777 pages A comprehensive reference on nanoscale materials chemistry—now revised and updated. This extensive text provides twenty-two revised chapters on the preparations, applications, and characterization as well as the environmental and toxicological aspects of nanoscale materials, with an emphasis on the chemistry component. This Second Edition contains core topics including: New synthetic methods for nanomateria...

Cambridge University Press, 2010. - 431 pp. The properties of new nanoscale materials, their fabrication and applications, as well as the operational principles of nanodevices and systems, are solely determined by quantum-mechanical laws and principles. This textbook introduces engineers to quantum mechanics and the world of nanostructures, enabling them to apply the theories to numerous nanostructure problems. The book covers the fundamentals of...

World Scientific Publishing Co., 2011, 299 pages The main focus of the book is to present the effects of nanostructuring on superconducting critical parameters. Optimizing systematically flux and condensate confinement in various nanostructured superconductors, ranging from single nano-cells to their huge arrays, critical fields and currents can be increased up to their theoretical limits, thus drastically improving the potential for practical...

McGraw-Hill, 2010, 292 pages State-of-the-art nanostructuring principles, methods, and aplications Synthesize, characterize, and deploy highly miniaturized components using the theories and techniques contained in this comprehensive resource. Written by a nanotechnology expert, this authoritative volume covers the latest advances along with detailed schematics and real-world applications in engineering and the life sciences. Inside, 37 differ...

Springer, 2010. - 239 p. - Nanophotonics draws upon cross-disciplinary expertise from physics, materials science, chemistry, electrical engineering, biology, and medicine to create novel technologies to meet a variety of challenges. This is the first book to focus on novel materials and techniques relevant to the burgeoning area of nanoscale photonics and optoelectronics, including novel-hybrid materials with multifunctional capabilities and rece...

Справочник
Academic Press, Amsterdam, 2010, 296 pages Many of the devices and systems used in modern industry are becoming progressively smaller and have reached the nanoscale domain. Nanofabrication aims at building nanoscale structures, which can act as components, devices, or systems, in large quantities at potentially low cost. Nanofabrication is vital to all nanotechnology fields, especially for the realization of nanotechnology that involves the trad...