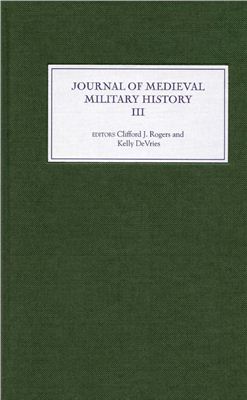 Volume III of De Re Militari's annual joual once again ranges broadly in its chronological and geographic scope, from John France's article on the evidence which early medieval Saints' Lives provide conceing warfare to Sergio Mantovani's examination of the letters of an Italian captain at the very end of the middle ages, and from Spain (Nicolas Agrait's study of early-fourteenth-century Castilian military structures) to the easte Danube (Carroll Gillmor's surprising explanation for one of Charlemagne's greatest setbacks). Thematic approaches range from 'traditional', though revisionist in content, campaign analyses (of Sir Thomas Dagworth, by Clifford J. Rogers, and of Matilda of Tuscany, by Valerie Eads), to tightly focused studies of a single document (Kelly DeVries on militia logistics in the fifteenth century), to controversial, must-read assessments of the broadest topics in medieval military history (Stephen Morillo and Richard Abels on change vs. continuity from Roman times; J. F. Verbruggen on the importance of cavalry.)

Cambridge University Press, 1998. - 1072 pp. This seventh volume of The New Cambridge Medieval History covers the last century (interpreted broadly) of the traditional Western Middle Ages. It takes account of much new research and modern, interdisciplinary approaches to the study and writing of history to present a broad view of late medieval society across Europe. It deals with ideas about government, social and economic change and development,...

This comprehensive volume provides easily accessible factual material on all major areas of warfare in the medieval west. The whole geographical area of medieval Europe, including eastern Europe, is covered, together with essential elements from outside Europe such as Byzantine warfare, nomadic horde invasions and the Crusades. The Routledge Companion to Medieval Warfare is presented in themed, illustrated sections, each preceded by a narrative o...

Cambridge Univercity press, 1991. - 816 p. This volume offers a comprehensive and authoritative account of the history of a complex and varied body of ideas over a period of more than one thousand years. A work of both synthesis and assessment, The Cambridge History of Medieval Political Thought presents the results of several decades of critical scholarship in the field, and reflects in its breadth of enquiry precisely that diversity of focus t...

Crabtree P.J. Encyclopedia of Society and Culture in the Medieval World

Facts on File, 2008. - 1280 p. The four-volume "Encyclopedia of Society and Culture in the Medieval World" provides readers with comprehensive coverage of the medieval world, from the fall of Rome to the European Renaissance, including Western and non-Western cultures and civilizations. Following an introduction that outlines the history of the major centers of civilization, this authoritative set features 71 alphabetical entries that explore sp...

Cambridge University Press, 2005. - 936 pp. The first volume of The New Cambridge Medieval History covers the transitional period between the later Roman world and the early middle ages, c. 500 to c. 700. This was an era of developing consciousness and profound change in Europe, Byzantium and the Arab world, an era in which the foundations of medieval society were laid and to which many of our modern myths of national and religious identity can...

Johnston R.A. All Things Medieval: An Encyclopedia of the Medieval World

Greenwood, 2011. - 790 pages. All Things Medieval: An Encyclopedia of the Medieval World covers the widest definition of "medieval Europe" possible, not by covering history in the traditional, textbook manner of listing wars, leaders, and significant historic events, but by presenting detailed alphabetical entries that describe the artifacts of medieval Europe. By examining the hidden material culture and by presenting information about topics t...

Cambridge University Press, 2000. - 1142 pp. The sixth volume of The New Cambridge Medieval History offers an authoritative synthesis of the major themes in European fourteenth-century history, written by leading British, continental and American scholars. It provides a wide-ranging account of a period of major social, political and cultural change, punctuated by the greatest natural disaster experienced by mankind, the Black Death. Illustrated...

Cambridge University Press, 2004. - 918 pp. The fourth volume of The New Cambridge Medieval History covers the eleventh and twelfth centuries, which comprised the most dynamic period in the European Middle Ages. The first of two parts, this volume deals with ecclesiastical and secular themes, in addition to major developments such as the expansion of population, agriculture, trade, and towns; the radical reform of the Western Church; the appeara...

Cambridge University Press, 1995. - 1103 pp. This volume of The New Cambridge Medieval History covers most of the period of Frankish and Carolingian dominance in western Europe. It was one of remarkable political and cultural coherence, combined with crucial, very diverse and formative developments in every sphere of life. Adopting an interdisciplinary approach, the authors examine the interaction between rulers and ruled, how power and authorit...

Cambridge University Press, 2000. - 891 pp. The period of the tenth and early eleventh centuries was crucial in the formation of Europe, much of whose political geography and larger-scale divisions began to take shape at that time. It was also an era of great fragmentation, and hence of differences that have been magnified by modern national historiographical traditions. This volume of The New Cambridge Medieval History reflects these varying tr...