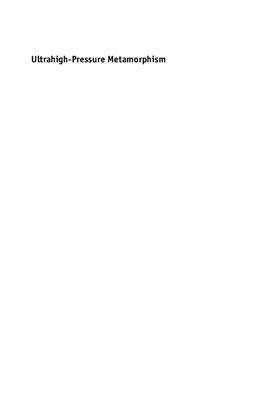 Ultrahigh pressure metamorphism (UHPM) is a relatively new but fast growing discipline related to the deep subduction of slabs of continental and/or oceanic crust into the Earth's mantle and their retu towards the surface as important components of mountain belts. The discipline was established ~25 years ago after discoveries of high pressure minerals, coesite and diamond, in the rocks of the continental affinities, a place where such minerals are "forbiden"according to main geological concepts. Exposures of HP/UHP rocks, once thought to be restricted to European Mountain systems, are being found in Asia, Africa, South and North Americas and Greenland. They provide us with valuable information on the mineral assemblages, fluid inclusions, microstructures, rheologies, major and trace element chemistries, stable and radiogenic isotope characteristics and timing relationships in slabs that have been subducted to depth up to some 200-250 km. Geologic processes under UHP conditions are by their very nature difficult to unravel because of the intense overprinting experienced by the rocks on their way back up to the Earth's surface. However, detailed studies in outcrops and in mineral/rock slides in laboratories with the aid of advanced state-of-art analytical instruments and techniques provide unprecedented integrated knowledge about processes operating in deep Earth's horizons at converging plate boundaries. UHPM rocks consist of the fragments of continental and oceanic crustal rocks and associated mafic-ultramafic intrusions and/or mantle peridotite initially formed at shallow lithosphere, but which subsequently have experienced a recrystallization within or above coesite and diamond stability fields ( 2.7 - 4 GPa, ~700 - 1000oC). Before coesite and diamond discoveries, the eclogites and peridotites that are characteristic of UHPM terranes were considered geological curiosities of limited occurrence and significance. The number of Geoscientists working on HP/UHP and related rocks has been increasing steadily each year as their significance has become more and more apparent, numbering now several hundred extremely active inteational scientists.The current explosion of research on UHPM terranes reflects their significance for understanding large scale mantle dynamics, major elements of plate tectonics such as continental collisions, deep subduction and exhumation, mountains building, geochemical recycling "from surface to the core", and a deep storage of light elements participating in green-house effects in the atmosphere.
Похожие разделы
Смотрите также