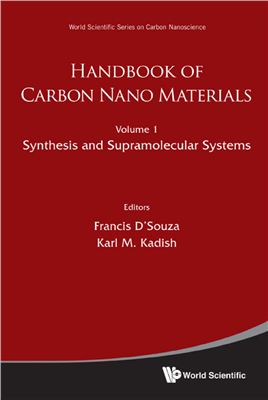 A hands on reference guide for scientists working in the fields of chemistry, physics, materials science, polymer science, solid-state physics, devices, nanotechnology or supramolecular science of carbon nanomaterials. In-depth and comprehensive coverage of topics combined with the perspectives for future research by the contributing authors. An invaluable reference source essential for both beginning and advanced researchers in the field.

The present Handbook of Carbon Nanomaterials consists of 23 chapters in two volumes which, as a whole, summarize current work and the latest developments in the field of carbon nanomaterials as seen through the eyes of more than three dozen leading researchers from around the world. The topics covered in this two volume set of books can be divided into four general areas. The first deals with the chemistry of fullerenes and carbon nanotubes, including organic functionalization, reactivity, perfluoroalkylation and fullerenes linked to photosensitizers. The second covers the chemistry and physics of endohedral fullerenes. The third major area of coverage involves molecular and supramolecular chemistry of fullerenes and carbon nanotubes while the fourth includes topics
related to photoinduced energy and electron transfer. Finally, applications of fullerenes, carbon nanotubes and graphenes as applied to organic molecular electronics, polymers composites, thermal conductive materials, photovoltaics and sensing are presented.
Похожие разделы
Смотрите также

RSC Publishing, 2010. - 287 p. - This unique book is the first treatment of nanotechnology as the science controlled by the behaviour of thermodynamic small systems. It provides comprehensive discussions on fullerenes as building blocks, Raman spectroscopy as a powerful diagnostic tool, and nanotechnology as the technology bridging the gap between human-made and biological materials systems. Aimed at graduate students, scientists, researchers, an...

Colombo L., Fasolino A. Computer-Based Modeling of Novel Carbon Systems and Their Properties: Beyond Nanotubes

Springer Science+Business Media, 2010, Pages: 249 During the last twenty years, the multiplicity of potential carbon structures has consistently posed a formidable challenge to theoretical and computational physicists. Several different methods are currently being used to study the structure and the properties of such systems. These methods include simulations based on empirical potentials, tight-binding calculations and density functional theo...

InTech, Rijeka, Croatia, 2011, 404 pages This book contains 16 chapters. In the first part, there are 8 chapters describing new materials and analytic methods. These materials include chapters on gold nanoparticles and Sol-Gel metal oxides, nanocomposites with carbon nanotubes, methods of evaluation by depth sensing, and other methods. The second part contains 3 chapters featuring new materials with unique properties including optical non-lineari...

Wiley-VCH Verlag, Weinheim, 2010, 906 Pages In this first comprehensive compilation of review chapters on this hot topic, more than 30 experts from around the world provide in-depth chapters on their specific areas of expertise, covering such essential topics as: Block Copolymer Systems, Nanofibers and Nanotubes Helical Polymer-Based Supramolecular Films Synthesis of Inorganic Nanotubes Gold Nanoparticles and Carbon Nanotubes Recent Advances in M...

Pan Stanford Publishing, 2009. - 200 p. - Rapid advances in chemical synthesis and fabrication techniques have led to novel nano-sized materials that exhibit original and often unforeseen properties. One of the greatest advantages of these nano-systems is that their electronic and optical properties can be controlled, not only by the material's inherent features, but also by the sample's size, shape, and topology. This flexibility makes them idea...

Справочник
CRC Press, 2010. - 909 pp. The field of nanoscience was pioneered in the 1980s with the groundbreaking research on clusters, which later led to the discovery of fullerenes. "Handbook of Nanophysics: Clusters and Fullerenes" focuses on the fundamental physics of these nanoscale materials and structures. Each peer-reviewed chapter contains a broad-based introduction and enhances understanding of the state-of-the-art scientific content through funda...

Справочник
CRC Press, 2010. - 787 pp. "Handbook of Nanophysics: Functional Nanomaterials" illustrates the importance of tailoring nanomaterials to achieve desired functions in applications. Each peer-reviewed chapter contains a broad-based introduction and enhances understanding of the state-of-the-art scientific content through fundamental equations and illustrations, some in color. This volume covers various composites, including carbon nanotube/polymer c...