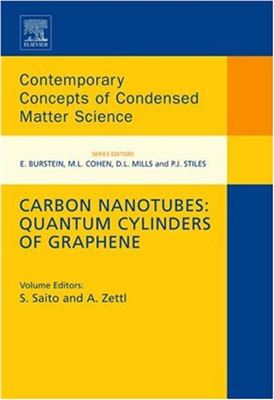 This volume is devoted to mostly to nanotubes, unique synthetic nanoscale quantum systems whose physical properties are often singular (i.e. record-setting). Nanotubes can be formed from a myriad of atomic or molecular species, the only requirement apparently being that the host material or "wall fabric" be configurable as a layered or sheet-like structure. Nanotubes with sp2-bonded atoms such as carbon, or boron together with nitrogen, are the champions of extreme mechanical strength, electrical response (either highly conducting or highly insulating), and thermal conductance. Carbon nanotubes can be easily produced by a variety of synthesis techniques, and for this reason they are the most studied nanotubes, both experimentally and theoretically. Boron nitride nanotubes are much more difficult to produce and only limited experimental characterization data exist. Indeed, for boron nitride nanotubes, theory is well ahead of experiment. For these reasons this volume deals largely with carbon nanotubes. Conceptually, the "building block" for a carbon nanotube is a single sheet of graphite, called graphene. Recently, it has become possible to experimentally isolate such single sheets (either on a substrate or suspended). This capability has in tu fueled many new theoretical and experimental studies of graphene itself. It is therefore fitting that this volume contains also a chapter devoted to graphene.
Смотрите также

World Scientific Publishing Co., 2011, 457 pages A hands on reference guide for scientists working in the fields of chemistry, physics, materials science, polymer science, solid-state physics, devices, nanotechnology or supramolecular science of carbon nanomaterials. In-depth and comprehensive coverage of topics combined with the perspectives for future research by the contributing authors. An invaluable reference source essential for both beg...

Wiley, 2007. - 421 p. - This volume combines the chemistry and materials science of nanomaterials and biomolecules with their detection strategies, sensor physics and device engineering. In so doing, it covers the important types of nanomaterials for sensory applications, namely carbon nanotubes, fullerenes, fluorescent and biological molecules, nanorods, nanowires and nanoparticles, dendrimers, and nanostructured silicon. It also illustrates a w...

Статья
World Scientific, 2011. - 287 pp. Graphene, a single sheet of graphite, has an unconventional electronic structure that can be described in terms of massless Dirac Fermions. This interesting electronic feature is not only an important fundamental issue in condensed matter physics but also holds future promise in post-Si electronic/spintronics device applications. Graphene is the most fundamental building block, with which a variety of carbon-base...