Computer Music Joual, 33:1, pp. 32–41, Spring 2009.
c 2009 Massachusetts Institute of Technology.
Franc?ois Rose? and James E. Hetrick†.
?Conservatory of Music.
†Physics Department.
University of the Pacific.
3601 Pacific Avenue.
Stockton, Califoia 95211 USA.
Spectral analysis has a rich and central place in the.
history and understanding of music, and mode.
music production relies heavily upon it. However,
the advanced use of Fourier techniques as an aid.
to composition—as opposed to a tool for signal.
processing or sound synthesis—has been relatively.
unexplored until recently (Carpentier et al. 2006,
2007; Carpentier, Tardieu, and Rodet 2007; Hummel.
2005; Psenicka 2003; Rose and Hetrick 2005, 2007).
Because orchestration is the vehicle that carries a.
musical idea from imagination to reality, it is clear.
that composers’ orchestration techniques have a.
major impact on their musical expressions. Spectral.
analysis, by providing essential information about.
sound mixtures that are new or that are subject to.
constraints, can profoundly and positively influence.
that technique.
In this article, we present our approach to.
such a computerized aid that extends the use.
of spectral analysis for orchestration. It uses a.
bank of Discrete Fourier Transforms (DFTs) of.
orchestral sounds, which are accessed in different.
ways designed to either perform sound analysis or.
propose orchestrations that imitate the energetic.
patte of a reference sound. The output of the tool.
is a weighted set of all possible sound mixtures from.
the palette, a subset of the complete bank—typically.
instruments for which the composer is writing.
Похожие разделы
Смотрите также 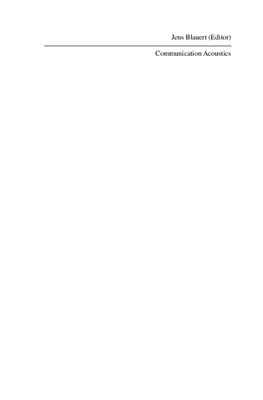 Издательство Springer, 2005, -385 pp. Communication Acoustics deals with those areas of acoustics which relate to the modern communication and information sciences and technologies. Due to the advent of digital signal processing and recording in acoustics, these areas have encountered an enormous upswing during the last four decades, whereby psychological and physiological knowledge is extensively exploited for technical applications. Communicat...

Springer, 2nd edition, 2006, 393 pages The book 'Acoustics of Wood' is devoted to those aspects related to the development of acoustic methods as an effective means for examining physical properties of wood through an interdisciplinary approach. The main parts of the book are: environmental acoustics, material characterization and quality assessment. In the first part of the book a discussion of the physical phenomena associated with the propag... 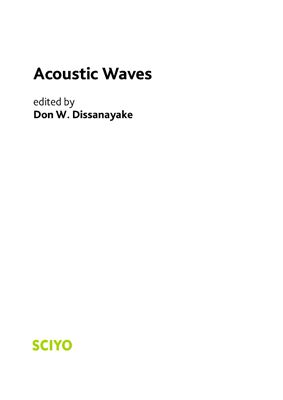 Издательство InTech, 2010, -478 pp. Surface Acoustic Wave (SAW) devices are widely used in multitude of device concepts mainly in Micro Electro Mechanical Systems (MEMS) and communication electronics. As such, SAW based micro-sensors, actuators and communication electronic devices are well known applications of SAW technology. Due to their solid state design and fabrication compatible with other modern technologies such as Microwave Integrated C...

This book is a companion volume to Fundamentals of Noise and Vibration published in 1998, which was based upon material presented in the first semester course of the one-year ISVR postgraduate Masters programme ‘Sound and Vibration Studies’ and was essentially pedagogic in form, content and purpose. This successor is based partly on material covered in a selection of elective modules in the second semester of the Masters programme and partly on m...

Academic Press, 1998. 320 p. ISBN:0122561902 The book is devoted to the very basis of acoustics and vibro-acoustics. The physics of the phenomena, the analytical methods and the modern numerical techniques are presented in a concise form. Many examples illustrate the fundamental problems and predictions (analytic or numerical) and are often compared to experiments. Some emphasis is put on the mathematical tools required by rigorous theory and r...

ISTE Ltd and John Wiley & Sons Inc., 2008, 288 pages Sound is produced by vibrations and as such can be dampened or augmented based on materials selection. This title looks at the effects of sound and vibration on thin structures and details how damage may be avoided, acoustical effects created, and sound levels controlled. The aim of this monograph is to present the basic concepts and methods necessary for the study of vibro-acoustics phe...

Generation of Natural-Synthetic Spectra by Means of Adaptive Frequency Modulation

This book has been written to encourage a new generation of scientists, engineers, and entrepreneurs to break the constraints of traditional disciplines and to apply the modem methods of acoustical physics to probe the mysterious sea. In order to assist the reader, we have included a large number of references that are of either historical or immediate importance. The inspired reader will keep up to date in applied ocean acoustics by referring to...

Prodeus A. On Possibility of Advantages Join of Formant and Modulation Methods of Speech Intelligibility Evaluation

Статья
Proceedings of the VI International Conference MEMSTECH 2010. - Lviv, Polyana, 2010. - Pp.254- 259. The possibility of advantages join of formant and modulation methods of evaluation of speech intelligibility is shown.

Статья
ACMC05 Generate and Test: Proceedings of the Australasian Computer Music Conference 2005 8 pages Abstract This paper discusses the design, function, and initial results of a set of four computer music tools. The tools are the first step in a series of attribute studies based on acoustic ecology and composition with natural sounds. The application of the tools enables abstraction, magnification, and transformation of specific attributes defining...