Ferronsky V.I., Ferronsky S.V. Dynamics of the Earth: Theory of the Planet's Motion Based on Dynamic Equilibrium 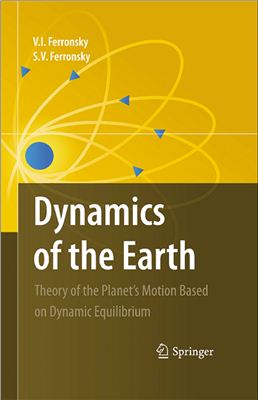 In their search for solutions to problems conceing the dynamics of the Earth as a self-gravitating body, the authors have applied the fundamentals found in their book Jacobi Dynamics (1987, Reidel). First, satellite observations have shown that the Earth does not remain in hydrostatic equilibrium, which forms the physical basis of mode geodynamics. Secondly, satellite data have established a relationship between the planet’s polar moment of inertia and the potential of the Earth’s outer force field, which proves the most basic point of Jacobi dynamics. This allowed the authors to revise their derivation of the classical virial theorem, introducing the concept of a volumetric force and volumetric moment, and so to obtain a generalized virial theorem in the form of Jacobi’s equation.
The main dynamical effects are: the kinetic energy of oscillation of the interacting particles, which explains the physical meaning and nature of gravitational forces; separation of shells of a self-gravitating body with respect to its mass density; differences in angular velocities of the shell’s rotation; continuity in variance of the potential of the outer gravitational force field, together with reductions in the envelope of the interacting masses (volumetric center of gravity); the nature of Earth, Moon and satellite precession; the nature and generating mechanism of the planet’s electromagnetic field; the common nature of gravitational and electromagnetic energy, and other related issues.

The work is a logical continuation of the book "Jacobi Dynamics" and is intended for researchers, teachers and students engaged in theoretical and experimental research in various branches of astronomy, geophysics, planetology and cosmogony, and for students of celestial, statistical, quantum and relativistic mechanics and hydrodynamics.
Похожие разделы
Смотрите также

Anderson D.L. Theory of the Earth

Blackwell, 1989.-379 pp. ISBN 0865423350. This book is assembled the bits and pieces from a variety of disciplines which are relevant to an understanding of the Earth. Rocks and magmas are our most direct source of information about the interior, but they are biased toward the properties of the crust and shallow mantle. Seismology is our best source of information about the deep interior; however, the interpretation of seismic data for purposes o...

Springer Science+Business Media, 2010, 262 pages, ISBN: 9048132355. This volume, written by the Hazards Science Team of the International Year of Planet Earth, brings together some of the most influential international scientists dealing with Natural Hazards and Society’s response to natural hazards. It recognises that hazards, like poverty, will always be with us but that concerted and organised societal response can prevent a hazard becoming a...

LOP Publishing Ltd, 1996. -397 pp. ISBN. 0750300523. This book is devoted to the theory of geoelectromagnetic oscillations and waves, i.e. waves of natural origin arising in the Earth's crust, in the ocean, in the atmosphere, in the ionosphere, in the magnetosphere and in the interplanetary medium in front of the magnetosphere. In order to read this book, one should have a basic knowledge of electrodynamics (standard educational course) and a g...

Lanza R., Meloni A. The Earth's Magnetism - An Introduction for Geologists

Springer, 2006. ISBN: 3540279792. Initially, this book reviews the general characteristics of the Earth’s magnetic field and the magnetic properties of minerals, and then proceeds to introduce the multifold applications of geomagnetism in earth sciences. The authors analyze the contribution of geomagnetism both in more general geological fields, such as tectonics and geodynamics, and in applied ones, such as prospecting and pollution. Primarily,...

CUP, 2006. -565 pp. ISBN 0521834414. This book is an introduction to the fascinating and important interplay between non-linear dynamics and statistical theories for geophysical flows. The book is designed for a multi-disciplinary audience ranging from beginning graduate students to senior researchers in applied mathematics as well as theoretically inclined graduate students and researchers in atmosphere/ocean science. The approach in this book e...

Merrill R.T., McElhinny M.W., McFadden Ph.L. The Magnetic Field of the Earth: Paleomagnetism, the Core, and the Deep Mantle

2nd edition, Acаdemic Prеss, 1996, 531 pages Topics involved in studies of the Earth's magnetic field and its secular variation range from the intricate observations of geomagnetism, to worldwide studies of archeomagnetism and paleomagnetism, through to the complex mathematics of dynamo theory. Traditionally these different aspects of geomagnetism have in the main been studied and presented in isolation from each other. This text draws together...

Wiley-VCH, 2009. ISBN-3527408754. Filling an important gap in the geophysical literature at specialist level, this monograph is the only up-to-date title to provide a link between the Earth's rotation and its atmo- and hydrosphere, including the ice masses. Starting with the Earth's motions, the text goes on to look at irregularities and the effect of atmospheric processes on the Earth's spin. Tides and seasons occupy the following sections befo...

4ed., CUP, 2008. –527 pp. The fourth edition of Physics of the Earth maintains the original philosophy of this classic textbook on fundamental solid Earth geophysics, while being completely revised and up-dated by Frank Stacey and his new co-author Paul Davis. Building on the success of previous editions, which have served generations of graduate students and researchers for nearly forty years, this new edition will be an invaluable resource for...

Kluwer Academic Publishers, 2003, 299 pages Paleomagnetic data are useful in many applications in Earth Science from determining paleocurrent directions to analyzing the long-term behavior of the geomagnetic field. In this book, an attempt has been made to draw together the various principles and practices within paleomagnetism in a consistent and up-to-date manner. It includes many practical examples that illustrate various applications of pal...