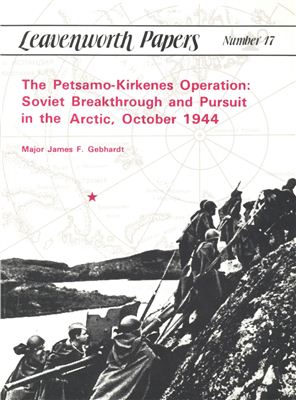 In the fall of 1944, some 56,000 German troops of the XIX Mountain Corps were occupying a strongpoint line just 70 kilometers northwest of Murmansk, about 200 miles north of the Arctic Circle. To clear these enemy forces from Soviet territory, STA VKA ordered General K. A. Meretskov's Karelian Front to plan and conduct an offensive, which was to be supported by Admiral A. G. Golovko's Northe Fleet. This Leavenworth Paper explains the planning and conduct of this offensive, known in Soviet military historiography as the Petsamo-Kirkenes Operation. The Soviet force of approximately 96,000 men was organized into a main attack force of two rifle corps, a corps- size economy-of-force formation, and two envelopment forces, one consisting of two naval infantry brigades and the other of two light rifle corps of two brigades each. The Soviets employed over 2,100 tubes of artillery and mortars, used 110 tanks and self-propelled guns, and enjoyed overwhelming air superiority. Engineer special-purpose troops infiltrated up to fifty kilometers behind German forward positions to conduct reconnaissance before the battle. On 7 October 1944, the Soviets began the offensive with a 97,000-round artillery preparation, followed by an infantry attack.
Похожие разделы
Смотрите также

Combat Studies Institute, 1984 - 120 p. (eng) This Leavenworth Paper chronicles the introduction of chemical agents in World War I, the U.S. Army's tentative preparations for gas warfare prior to and after American entry into the war, and the AEF experience with gas on the Western Front.