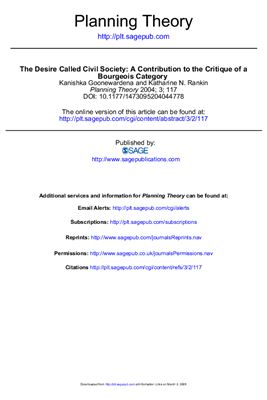 How does ‘civil society’ serve the Washington Consensus
while also attracting the aspirations of left political activists and
progressive planners? We address this troubling question by interrogating
the concept of civil society, with due respect to the actual role
played by civil society in the development of capitalism. Based on
close readings of Hegel, Marx and planning theory dealing with it, we
also argue that the discourse of civil society now serves neoliberalism
quite well, but provides dubious support for ‘radical’ or ‘insurgent’
planning. As an ideal for the latter, we propose instead the radical
democratization of both the economy and the state.
Смотрите также

Oxford University Press, 2005. 319 p. Examines which political principles should govern global politics. It explores ethical issues in justice that arise at the global level and addresses questions such as: are there universal values, and if so, what are they; what human rights, if any, are there; are there global principles of distributive justice; should there be a system of supra-state institutions; is national self-determination defensible;...

Энциклопедия
SAGE Publications, 2007. 2 vols. 1027 p. The language of governance extends to patterns of rule found throughout our daily lives. Governance also provides us with a language with which to remake our world. We might ask how to make markets, networks, international organizations, corporations, and other associations democratically accountable. We might also ask what values we want to uphold in our practices of governance. It is important for us to...

Pareto and Political Theory offers a much-needed reappraisal of Vilfredo Pareto's often ignored or misunderstood contribution to the theory and philosophy of politics. Joseph V. Femia disputes the depiction of Pareto as a proto-fascist and locates him in a clear tradition of 'sceptical liberalism', which eschews metaphysical abstractions and adopts a 'realist' approach to practical politics

University of Massachusetts Press, 1994. - 222 p. In this book Paul Hirst makes a major contribution to democratic thinking, advocating "associative democracy"; the belief that human welfare and liberty are best served when as many of the affairs of society as possible are managed by voluntary and democratically self–governing associations. Representative government and corporate bureaucracy have dominated the 20th century. In this book Paul Hirs...

WORD document, 43 pages THE subject of this Essay is not the so-called Liberty of the Will, so unfortunately opposed to the misnamed doctrine of Philosophical Necessity; but Civil, or Social Liberty: the nature and limits of the power which can be legitimately exercised by society over the individual. A question seldom stated, and hardly ever discussed, in general terms, but which profoundly influences the practical controversies of the age by i...

Listed essays are: ·Critique Analysis on Environmental Double Standards for Sport Utility Vehicles ·Reel vs. Real of Charlie Wilson’s War ·Synopsis of Abolish the Electoral College: House Joint Resolution · The Causes for American Participation into WWI and Effects that WWI Brought to the World ·The Causes Vietnam War and the Major Flaws in America’s Participation