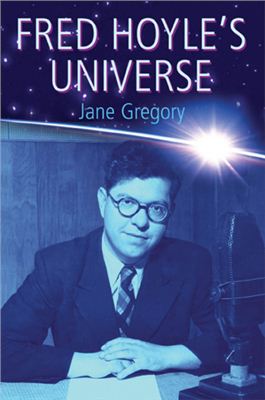 Oxford University Press, 2005. - 406 pp.
Fred Hoyle was one of the most widely acclaimed and colourful scientists of the twentieth century, a down-to-earth Yorkshireman who combined a brilliant scientific mind with a relish for communication and controversy. Best known for his steady-state theory of cosmology, he described a universe with both an infinite past and an infinite future. He coined the phrase 'big bang' to describe the main competing theory, and sustained a long-running, sometimes ill-tempered, and typically public debate with his scientific rivals. He showed how the elements are formed by nuclear reactions inside stars, and explained how we are therefore all formed from stardust. He also claimed that diseases fall from the sky, attacked Darwinism, and branded the famous fossil of the feathered Archaeopteryx a fake. Throughout his career, Hoyle played a major role in the popularization of science. Through his radio broadcasts and his highly successful science fiction novels he became a household name, though his outspokenness and support for increasingly outlandish causes later in life at times antagonized the scientific community.
Jane Gregory builds up a vivid picture of Hoyle's role in the ideas, the organization, and the popularization of astronomy in post-war Britain, and provides a fascinating examination of the relationship between a maverick scientist, the scientific establishment, and the public. Through the life of Hoyle, this book chronicles the triumphs, jealousies, rewards, and feuds of a rapidly developing scientific field, in a narrative animated by a cast of colourful astronomers, keeping secrets, losing their tempers, and building their careers here on Earth while contemplating the nature of the stars.
Похожие разделы
Смотрите также

1001 Amazing Tech Facts: Trivia that gives you the edge

Author: Seagate. Publisher: Jasubhai Digital, 2004. - 121 pages. In 1981, in an apparent moment of epiphany, William Henry Gates III told a gathering that in the future 640 KB of RAM ought to be enough for anybody. Today, Gates, one of the richest men in the universe, makes most of his money selling software so heavy even a Sumo wrestler would blush. Ergo, even the most successful, or foresighted, people in the world are not infallible. Twenty-t...

Baggott J. The Quantum Story: A History in 40 Moments

Oxford University Press, 2011, 469 pages Utterly beautiful. Profoundly disconcerting. Quantum theory is quite simply the most successful account of the physical universe ever devised. Its concepts underpin much of the twenty-first century technology that we now take for granted. But at the same time it has completely undermined our ability to make sense of the world at its most fundamental level. Niels Bohr claimed that anybody who is not shoc...

Published by Oxford University Press, Inc. Христиансон "Исаак Ньютон". 2005 г. , 144 стр. Качество высокое (PDF-оригинал). In 1665, when an epidemic of the plague forced Cambridge University to close, Isaac Newton, then a young, undistinguished scholar, returned to his childhood home in rural England. Away from his colleagues and professors, Newton embarked on one of the greatest intellectual odysseys in the history of science: he began to formul...

Springer, 2011. - 261 p. In Miletus, about 550 B.C., together with our world-picture cosmology was born. This book tells the story. In Part One the reader is introduced in the archaic world-picture of a flat earth with the cupola of the celestial vault onto which the celestial bodies are attached. One of the subjects treated in that context is the riddle of the tilted celestial axis. This part also contains an extensive chapter on archaic astrono...

Mehra J. The beat of a different drum: the life and science of Richard Feynman

Oxford: Clarendon Press, 1996. - 630 pp. Few would argue that Richard Feynman was one of the greatest American-born theoretical physicists of the twentieth century, and fewer still would dispute that he was the most iconoclastic. In the words of the eminent mathematician Mark Kac, geniuses are of two kinds: the ordinary, and the magicians. Feynman was a magician of the highest caliber. No one could guess how his mind worked, how he could make tra...