Jammer M. Concepts of Mass in Contemporary Physics and Philosophy 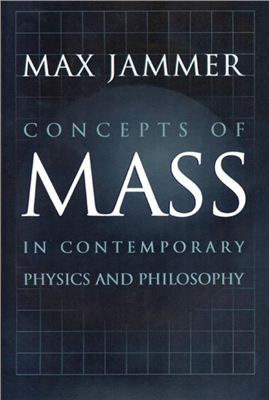 The concept of mass is one of the most fundamental notions in physics, comparable in importance only to those of space and time. But in contrast to the latter, which are the subject of innumerable physical and philosophical studies, the concept of mass has been but rarely investigated. Here Max Jammer, a leading philosopher and historian of physics, provides a concise but comprehensive, coherent, and self-contained study of the concept of mass as it is defined, interpreted, and applied in contemporary physics and as it is critically examined in the mode philosophy of science. With its focus on theories proposed after the mid-1950s, the book is the first of its kind, covering the most recent experimental and theoretical investigations into the nature of mass and its role in mode physics, from the realm of elementary particles to the cosmology of galaxies.The book begins with an analysis of the persistent difficulties of defining inertial mass in a noncircular manner and discusses the related question of whether mass is an observational or a theoretical concept. It then studies the notion of mass in special relativity and the delicate problem of whether the relativistic rest mass is the only legitimate notion of mass and whether it is identical with the classical (Newtonian) mass. This is followed by a critical analysis of the different derivations of the famous mass-energy relationship E = mc2 and its conflicting interpretations. Jammer then devotes a chapter to the distinction between inertial and gravitational mass and to the various versions of the so-called equivalence principle with which Newton initiated his Principia but which also became the starting point of Einstein's general relativity, which supersedes Newtonian physics. The book concludes with a presentation of recently proposed global and local dynamical theories of the origin and nature of mass.Destined to become a much-consulted reference for philosophers and physicists, this book is also written for the nonprofessional general reader interested in the foundations of physics.
Похожие разделы
Смотрите также

McGraw-Hill, 2011, 1472 pages A comprehensive text with enhanced calculus coverage incorporating a consistently used 7-step problem solving method. The authors include a wide variety of everyday contemporary topics as well as research-based discussions. Both are designed to help students appreciate the beauty of physics and how physics concepts are related to the development of new technologies in the fields of engineering, medicine, astronomy...

Brooks/Cole, Cengage Learning, 2010, 1182 pages Master the fundamental concepts of physics with COLLEGE PHYSICS: REASONING & RELATIONSHIPS. The theme of "reasoning and relationships," reinforced throughout the text, helps you master these concepts, apply them to solve a variety of problems, and appreciate the relevance of physics to your intended career and your everyday life. By understanding the reasoning behind problem solving, you'll lea...

Статья
Am. J. Phys. 71 (2), February 2003, pp. 104-121 The connection between physics teaching and research at its deepest level can be illuminated by Physics Education Research (PER). For students and scientists alike, what they know and learn about physics is profoundly shaped by the conceptual tools at their command. Physicists employ a miscellaneous assortment of mathematical tools in ways that contribute to a fragmentation of knowledge. We can do...

Cambridge University Press, 2010, 728 p. Covering all aspects of gravitation in a contemporary style, this advanced textbook is ideal for graduate students and researchers in all areas of theoretical physics. The 'Foundation' section develops the formalism in six chapters, and uses it in the next four chapters to discuss four key applications - spherical spacetimes, black holes, gravitational waves and cosmology. The six chapters in the 'Frontier...

7th ed. - Brooks Cole, 2007. - 1504 pages. Achieve success in your physics course by making the most of what PHYSICS FOR SCIENTISTS AND ENGINEERS has to offer you. From a host of in-text features to a range of outstanding technology resources, you’ll have everything you need to understand the natural forces and principles of physics. Throughout every chapter, the authors have built in a wide range of examples, exercises, and illustrations that w...

Stenger V. The Comprehensible Cosmos: Where Do the Laws of Physics Come From?

Prometheus Books, 2006, 340 p. In a series of remarkable developments in the 20th century and continuing into the 21st, elementary particle physicists, astronomers, and cosmologists have removed much of the mystery that surrounds our understanding of the physical universe. We now have mathematical models that are consistent with all observational data, including measurements of incredible precision, and we have a good understanding of why those m...

9 ed. - John Wiley & SonsWiley, 2011. - 1136 p. This book arms engineers with the tools to apply key physics concepts in the field. A number of the key figures in the new edition are revised to provide a more inviting and informative treatment. The figures are broken into component parts with supporting commentary so that they can more readily see the key ideas. Material from The Flying Circus is incorporated into the chapter opener puzzler...

2nd Edition, Pearson Education, Addison Wesley, 2011, 781 pages Richard Wolfson’s Essential University Physics, Second Edition is a concise and progressive calculus-based physics textbook that offers clear writing, great problems, and relevant real-life applications. This text is a compelling and affordable alternative for professors who want to focus on the fundamentals and bring physics to life for their students. Essential University Physics...