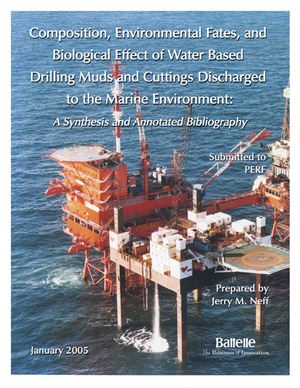 Effects of Water Based Drilling Muds:
Water based drilling muds (WBM) consist of fresh or salt water containing a weighting agent (usually barite: BaSO4), clay or organic polymers, and various inorganic salts, inert solids, and organic additives to modify the physical properties of the mud so that it functions optimally. Drill cuttings are particles of crushed rock produced by the grinding action of the drill bit as it penetrates the earth.
The U.S. Environmental Protection Agency, or a state environmental agency designated by EPA, regulates discharges of drilling muds and cuttings to state and federal waters of the U.S. Current National Pollutant Discharge Elimination System (NPDES) permits allow discharge of WBM and cuttings to federal, but not state, waters if they meet restrictions in the Effluent Limitation Guidelines (ELG).
WBM are pumped from the mud tanks on the platform down the hollow drill pipe and exit the drill string through holes in the drill bit. They sweep cuttings from the drill bit up the space between the drill string and the wall of the well (the annulus) to the platform deck. The mud/cuttings mixture is passed through separation equipment that separates the cuttings from the drilling mud, which is retued to the mud tanks for recirculation down-hole. If permitted by local regulations, the cuttings may be discharged to the ocean. Periodically, some of the drilling mud may be discharged as well. The total mass of WBM and cuttings discharged per exploratory well is about 2000 metric tons/well, and somewhat less for most development wells.
When WBM and cuttings are discharged to the ocean, the larger particles and flocculated solids, representing about 90 % of the mass of the mud solids, form a plume that settles quickly to the bottom. The remaining 10 % of the mass of the mud solids consisting of fine-grained unflocculated clay-sized particles and a portion of the soluble components of the mud form another plume in the upper water column that drifts with prevailing currents away from the platform and is diluted rapidly in the receiving waters. In well-mixed ocean waters, drilling muds and cuttings are diluted by 100-fold within 10 m of the discharge and by 1000-fold after a transport time of about 10 minutes at a distance of about 100 m from the platform. Because of the rapid dilution of the drilling mud and cuttings plume in the water column, harm to communities of water column plants and animals is unlikely and has never been demonstrated.
WBM and cuttings solids settle to and accumulate on the sea floor. If discharged at or near the sea surface, the mud and cuttings disperse in the water column over a wide area and settle as a thin layer of a large area of the sea floor. If mud and cuttings are shunted to and discharged just above the sea floor in order to protect nearby sensitive marine habitats, the drilling solids may accumulate in a large, deep pile near the discharge pipe.
The accumulation of mud and cuttings on the bottom, the cuttings pile, may contain higher concentrations of several metals, particularly barium (from drilling mud barite), and sometimes petroleum hydrocarbons than nearby uncontaminated sediments. Chromium, lead, and zinc are the metals, in addition to barium, that are most often enriched in cuttings pile sediments. Until EPA placed limits on the concentrations of cadmium and mercury concentration in drilling mud barite in 1993, some of the barite used in drilling muds contained elevated concentrations (compared to concentrations in natural marine sediments) of several metals. Cuttings piles containing these muds often contained elevated concentrations of several metals.
Barite has a very low solubility in sea water. The metals associated with drilling mud barite are present as insoluble sulfide minerals. Several laboratory and field studies have shown that the metals associated with drilling mud barite or cuttings piles have a low bioavailability to marine animals; they do not accumulate in the tissues of bottom-living animals.
January 2005
Смотрите также

Shell Internationale Petroleum Maatschappij B. V. , The Hague, The Netherlands, 1998 - 498 pages Some basic concepts in reservoir engineering PVT analysis for oil Material balance applied to oil reservoirs Darcy's law and applications The basic differential equation for radial flow in a porous medium Well inflow equations for stabilized flow conditions The constant terminal rate solution of the radial diffusivity equation and its application to...

Grace R. Oil: An Overview of the Petroleum Industry

Gulf Publishing Company, 2007. 167 p. ISBN:9781933762012 Since the book's original publication in 1958, this handy volume has taught thousands about this constantly evolving industry that is so important for our everyday energy needs. Engineers, executives, managers and laypersons will all find this to be a valuable, entertaining and informative guide that presents a practical study of the operations involved in oil exploration, drilling and pr...

Grace R. Oil: An Overview of the Petroleum Industry

Sixth Edition. Gulf Publishing Company, 2007. 167 p. ISBN:9781933762012 Since the book's original publication in 1958, this handy volume has taught thousands about this constantly evolving industry that is so important for our everyday energy needs. Engineers, executives, managers and laypersons will all find this to be a valuable, entertaining and informative guide that presents a practical study of the operations involved in oil exploration,...

Gulf Publishing Company, Houston, 1996. – 287 pp. This book has evolved from course notes developed by the author for use in undergraduate and graduate classes. In preparing the book, the author has read thousands of pages of papers, reports, manuals, and books on the topic of environmental concerns facing the upstream petroleum industry. Although it is believed that this book is technically accurate, some errors and omissions have invariably occ...

The International Association of Oil & Gas producers (OGP) encompasses most of the world’s leading publicly-traded, private and state-owned oil & gas companies, oil & gas associations and major upstream service companies. An essential part of OGP’s mission is to represent the interests of the upstream industry before international regulators and legislators. OGP also helps members achieve continuous improvements in safety, health an...

I.B. Tauris, 2004. 364 p. The environmental, the economic - and indeed the political - impact of the catastrophic 2010 blowout of BP’s well in the Gulf of Mexico has highlighted the central part played by oil in the modern world. The fate of millions now depends on the ever-shifting value of petroleum and on the fortunes of the corporations that deliver it. The story of oil - how it came to play such a dominant role in the world economy, who con...